A team of eight co+labo students, which included Shigemura Hiroki, Kinoshita Norimi  Samejima Takuomi, Morimoto Mei, Nishibori Shinichi, Iwata Amami, Muxi Yang and Mori Yuku has received 3rd prize and a Jury Award at an interesting design competition for the Tea Ceremony Pavilion in Ginza - 銀茶会の茶席. Shigemura-san summarises that "year's theme was 綾, Aya, or Pattern. As the 2020 year approaches, Aya's characters express efforts towards recognition and h diverse people and harmonisation of various peoples and cultures, mixed in a wide variety of places. Ginza is the precincts of Tokyo whose broad streets invite and welcome many cultures and offers a lot of Aya. The intention behind co+labo entry, entitled "織折庵", Oriorian, was to express the global culture of Ginza by using simple, everyday element of western origin, an ordinary cloths hanger t, through repetition and variation, generate Japanese geometric pattern. The pavilion is highly adaptable, in terms of its volume, shape and patterns, and capable to fit any of Ginza's diverse spaces and events."
The members of the Jury which recognise design quality of co+labo hanger pavilion were Motonami (Mushanokouji senke), Tomohiro Kimura (Executive Director of Tange Architecture Office), Noriaki Shoji (MitsukoshiGinza CEO), Masato Tajima (Executive Director of Ginza groups), Tatsuya Ukai (Kyushu University), Hiromi Sakaguchi (Taisei Kensetsu), Jun Sato (Tokyo University) and Koko Nakamura (Nikken Sekiei).
Warmest co+labo congratulations to all team members, whose way of work and thinking confirms the essence of our way. 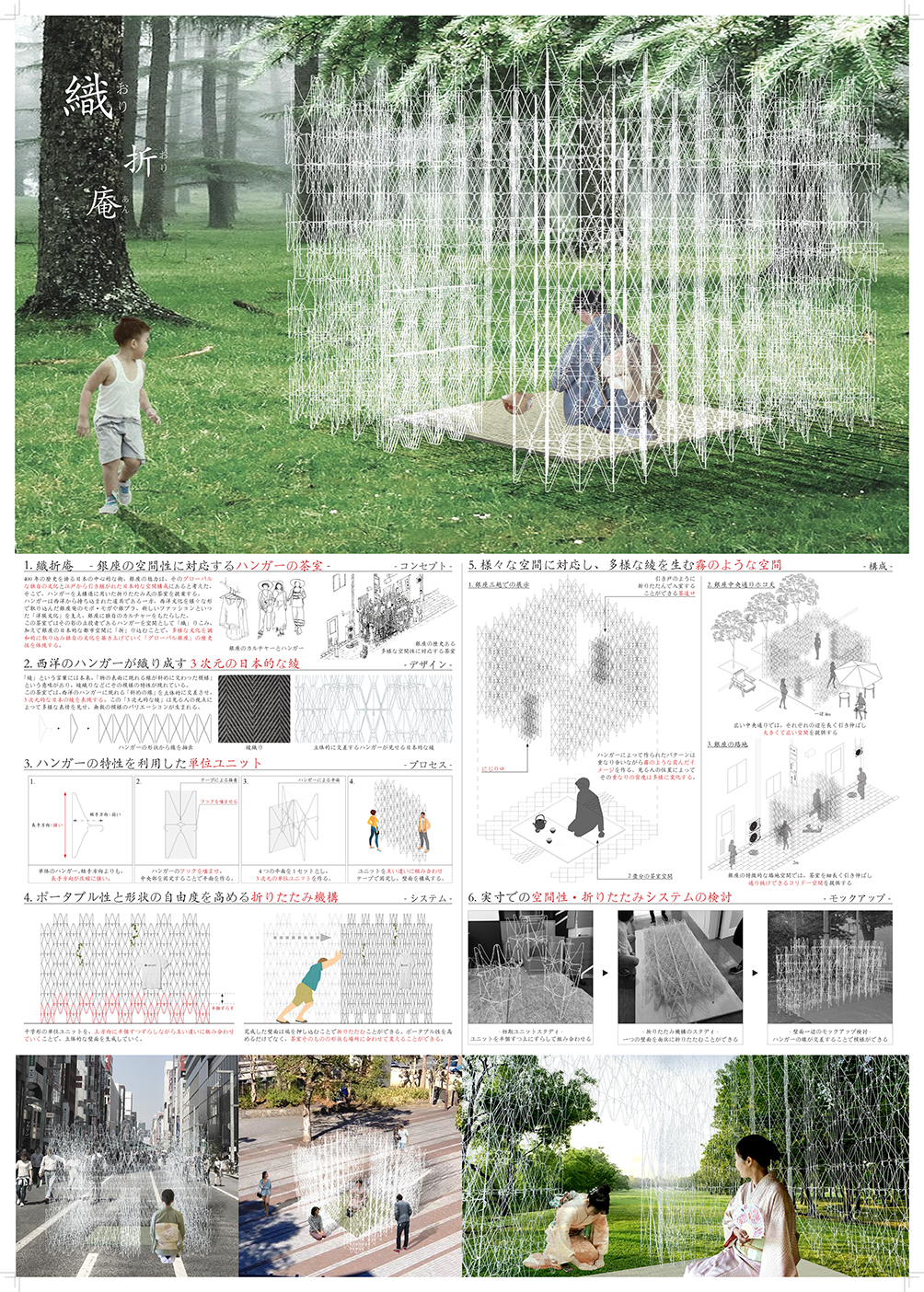 Posted by MIAW studio Radović at 5:07 PM No comments:

Email ThisBlogThis!Share to TwitterShare to FacebookShare to Pinterest
co+labo radović    co+labo research semester follows an intensive summer of  workshops
co+labo celebrates multiplicities, not only in what we chose to do, but, importantly, in the ways how we work. Those activities, the selection of which gets presented at this blog, follow a loose tripartite structure: Spring - dominated by design and making; Summer - mainly focused at international activities; and Autumn - the completion of undergraduate and masters research, many projects which are in progress throughout the year. Almost feverish action of Spring and Summer 2019 are now getting translated into the slower pace of investigations and writing up. As co+labo  seeks to discover and nurture individual sensibilities, in research that results in a broad variety of themes, shared and cross-fertilised through frequent meetings, presentations and discussions.
Posted by MIAW studio Radović at 5:07 PM 1 comment:

In 2018, co+labo team headed by Ivan Filipović has submitted their entry to one international competition of ideas - for the new Embassy of the Republic of Serbia in the Australian capital of Canberra. The work, based on Ivan's PhD investigations of Soft Power Architecture, an important expression of which are diplomatic buildings and complexes, was designed by Ivan, Akitaka Suzuki, Mayuko Mikogami, Daisuke Kobayashi and Takuomi Samejima. The entry has not received an official award but the recognition  and awards from other sources started coming. While the entry has not received an official award, the recognition  and awards from other sources started coming. That points at the importance of academic teams taking part in design competitions and communicating the right message, even when clear that that might not be the award-winning scheme. Competitions mainly operate within the paradigm, for the "real world". On the other hand, one of the key roles of academia is precisely to challenge the paradigm, to question the business as usual, with approaches which are founded in research desire to create a better world. Ivan's PhD investigations at co+labo open such horizons. The ideas based on that research were transformed into a concrete design proposal have received the Grand Prix for Architecture of the Institute of Architects of Serbia and, most recently, an award at the International Association of Unions of Architects, this year held in  the Kyrgyz capital of Bishkek. Ivan explains: "While pondering a new approach to embassy design, the focus oftentimes lies in control, limited freedom of movement and inaccessibility. These typological realities were identified as weak points and the proposed architectural design aimed to solve these issues. 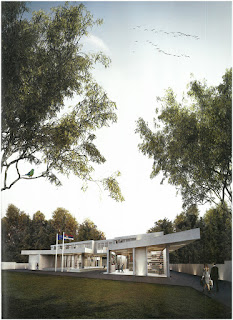 The first question that arises is what is the (preferred) identity of the Republic of Serbia? How to present the qualities? In addition to direct, formal metaphors, an observed cultural specificity was: a spirit of community, interpersonal relationships, and enjoyment of various group activities. Taking into account the main concept, the embassy as a home, as a meeting place, the two fit perfectly.
Embassy as a meeting place, embassy as a community center, embassy as (a piece of) home. The size of the Serbian expat community in Australia is significant, so it was the obligation to create spaces that would offer quality and support the main concepts. Although direct transplantation of individual activities was not possible (nor justified), the design sought to create a meeting place with the characteristics of the Serbian culture.
In parallel with the conceptual solution, which allows freedom of movement and choice of activities, the main function of the facility is not forgotten, nor is the necessary level of safety and security. These factors have contributed to the multilayered solution that gives the design manipulation and "softening" of boundaries the illusion of complete openness, however, in reality, the facility and activities are highly controlled and the facility meets all security requirements."
Posted by MIAW studio Radović at 5:07 PM 165 comments: