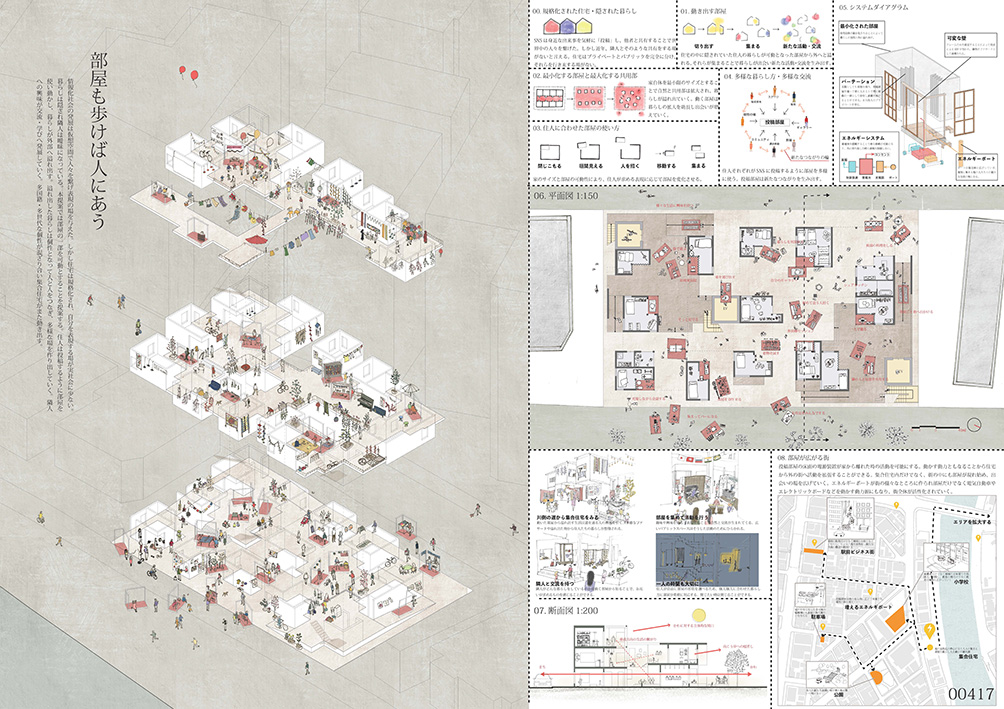 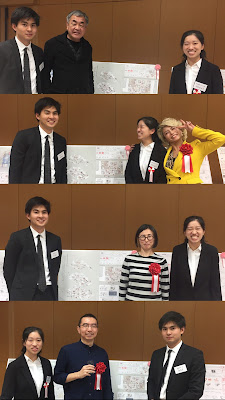 And ... here is the proof that at co+labo the year never finishes with the end of the year party. The news has just arrived that our Amami Iwata and Yuki Mori have received the Second Award at Haseko Residential Design Competition. The composition of the Jury tells all about the importance and quality of this contest. The Chair was Kengo Kuma, and the members included Kumiko Inui, Sousuke Fujimoto, Motoko Tanaka and Kazuo Ikeda (left).

The Theme of the competition was a multi-generation and multi-national housing complex. This proposal, entitled 部屋も歩けば人にあう - "When the room walks, it meets people".  Mori-san explains how they "proposed movable small rooms for each of the houses which make it possible for people to post their daily life like SNS. The rooms personified by their user would help interactions and span difficulties arising from diverse cultural backgrounds, with spaces capturing diverse characters of their residents. This movable rooms would also be able to venture into urban space, seeking the best space to stay. That would help discover the capacity of vacant urban spaces, such as parkings, streets and parks for acquiring new quality, in addition to multi-generational and multinational usage of these wandering rooms." The project will be published in the 2020 February issue of "Shinkenchiku" magazine.
Warm co+labo congratulations to Iwata-San and Mori-san! 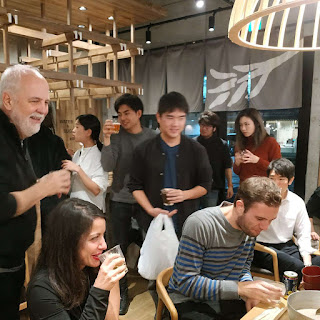 The annual co+labo "forget-the-year-party" farewelled the 2019. Although "forget the year" is a literal translation of bōnenkai" the year behind us was certainly not a year that will, of should be easily forgotten. The list of colaboradović.blogspot entries for 2019 includes successful PhD theses defences and starts of new projects, hosting guest lecturers and delivering guest lectures at other places in Tokyo and abroad, organisation and participation in symposia and conferences in Japan and overseas, double-degrees and international workshops and the very important Comprehensive Design Workshop, which ended up with a highly successful exhibition, symposium and lectures - in organisation and delivery of which co+labo was - Keio Architecture. In 2019 we have made the strongest collective push towards helping the oldest university in japan establish a discrete graduate programme in architecture and urbanism. All those activities and achievements add up (in our collaborative + ++ +  ++++ + manner) to a great year, which should never be forgotten 2019. The bōnenkai was also an opportunity for everyone to meet our new two members - Yurino Oguri and Reiya Sasaki (who, in bōnenkai tradition, helped make excellent food for their senpai). Welcome+頑張ってください!
Sincere co+labo thank you go to all of our colleagues, friends and associates in Japan, Croatia, Slovenia, Italy, Serbia, UK, Sweden, Australia, Ecuador, Thailand, Serbia, Spain who have variously joined in, helped share and deliver those projects and whom we are planning new projects for the years to come.
Posted by MIAW studio Radović at 11:06 PM 2 comments:

Email ThisBlogThis!Share to TwitterShare to FacebookShare to Pinterest
co+labo radović    co+labo's OB get First Prize for the best Thesis at Politecnico di Milano

Politecnico di Milano has formally awarded the prizes for Best Graduation Thesis, Migliore Tesi in Ingegneria Edile-Architettura at their campus in Secco, and the winners were three co+labo+PoliMi boys - Akitaka Suzuki (who is also first Keio-Polimi Double Degree laureate), Nicoló Panzeri and Enrico Sterle (who have both spend a semester at co+labo). Aki-san went back to Milano to join the ceremony at his second Alma Mater and for reunion with friends (including some from EMBT, where he did his internship) and professors. Local Lecco News have informed the broader audiences about this, well-known  and highly regraded award.
The Jury explained the reasons for choosing Aki, Nikoló and Enrico's design-research project, summarising how " the work is characterised by highly unique theme, and it achieved an uncommon maturity and design complexity. In particular, the strong visual/graphical communication ability and analysis on its production and realisation aspects are underlined."
co+labo congratulations to Aki, Nikoló and Enrico and their supervisors, including Gabriele Masera (at the selfie below).