co+labo radović      final tests of co+labo's HAPP cloud Pavilion
co+labo team is making final adjustments of the HAPP, Hiyoshi Art and Performance Project pavilion, which will be erected on 26 October, as part of the Hiyoshi Autumn Festival, regular event organised by Keio Research Center for the Liberal-Arts. The core team members, Ueno Wakataro, Tsuji Soyoka and Magome Ayumu, assisted and visited by other co+labo students and friends, are exploring the best position for their bubbly "cloud", so that it can contribute to the main aim of the Festival, help facilitate communication between the University and its broader community.
co+labo's scheme was the winner at the Keio University  - HAPP Competition 2015. 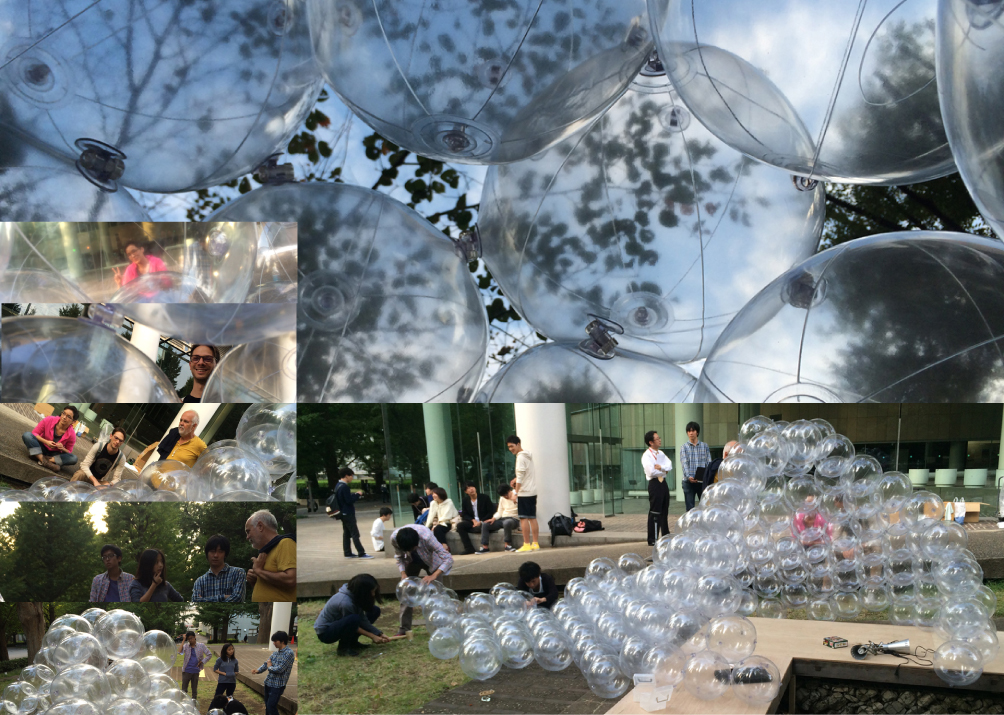 Posted by MIAW studio Radović at 7:17 AM No comments:

Final year Masters student at co+labo, Sotaro Miyatake, took a year off to embark on some intensive internship,  enrich his experience and further expand his understanding of and the skills in making quality in architecture and urban design. Since September, he is at the co+labo's prestigious partner Gehl Architects in Copenhagen. Miyatake-san currently works on several Gehl project under the mentorship of David Sim, a Creative Director and Partner at Gehl's and a regular contributor to various co+labo activities, from joint fieldwork in Tokyo to research Conferences and Symposia, regardless of those are held in the biggest city in the world, Tokyo or at the tiny island of Vis.
Once he gets back to co+labo, Miyatake's experience will help us further advance the quality of our research and design-reserach in the field of urban quality, expand collaboration with Gehl's, and inspire our other students to seek international knowledge and top global standard skills.

Photo: Miyatake-san, under the close scrutiny of his mentor@Gehl's, David Sim.
Posted by MIAW studio Radović at 6:11 AM No comments:

In 2012, by winning the 3rd LIXIL International Competition for the Next Generation Sustainable House, co+labo has achieved one of its greatest successes. The win at the reputable international competition was a big achievement itself. But, the most important was that the victory was based on true design-reserach exploration of the basic principles of co+labo  on rigorous application of an ethos of environmental and cultural responsiveness and responsibility, broader ideas which have found their spatial expression by responding to multilayered, complex physical, climatic, social and cultural realities of Memu Meadows, Taiki Cho, Hokkaido.
The Barn House questioned and enriched the requirements of the competition brief to accommodate two visiting researchers by adding another two residents, two horses which provided critical contribution to energy balance of the house AND whose presence continues to provoke critical thinking and generates an awareness about the widespread environmental and cultural degradation. The Barn House was designed to remind that sustainable architecture has to address not only the pragmatic issues such as energy balance, but also those related to the poetics and totality of place, that it has the responsibility to deal with meaning, identity, otherness and belonging.One of important aspect of the co+labo concept of Barn House was that the project was never to be finished. The house was conceived as a space of learning, a space to learn in, a space to learn from, and a space which iteslf learns, changes and, hopefully, gets better.
Over the last three years, during their regular visits to Memu Meadows, co+labo students investigated various aspects of the performance of the building, and contributed to efforts to improve it. During the last summer, we have organised an internal co+labo competition of ideas, aiming to open new stage in the life of the Barn House. We sought to address the quality of life of both human and equine residents, and how to make them fully live Hokkaido and enjoy life there.
The Jury members were Milica Muminović (University of Canberra), Komatsu Katsuhito (KKAA, Kengo Kuma Architecture Associates) - both the members of the award winning team,  Saikawa Takumi (KKAA, the LIXIL competition advisor), Vuk Radović (co+labo founding partner and team advisor), Meijo Toshiki (KKAA) and Kondo Tetsuo (Kondo Architects). The Chair of the Jury was Darko Radović, and Technical Secretary and Advisor Sano Satoshi.

The members of the Jury have identified a number of elements in each of the projects which deserve consideration, and suggested their further development.  co+labo's visiting PhD student Paula Jaen will be in charge of design development team and help the Barn House find new expressions of the values and ideals our laboratory stands for.

Posted by MIAW studio Radović at 6:08 PM No comments:

On 12 October, co+labo members were treated with a very special gift - a guided tour through the exhibition Oscar Niemeyer: The Man Who Built Brasilia at MOT, The Museum of Contemporary Art Tokyo. The tour was organised and guided by an old friend of co+labo, the Ambassador of Brazil in Japan, Mr André Correa do Lago. In true co+labo spirit (represented by  + ... + ... + ...), we invited members of Keio's other architecture and urban design laboratories. 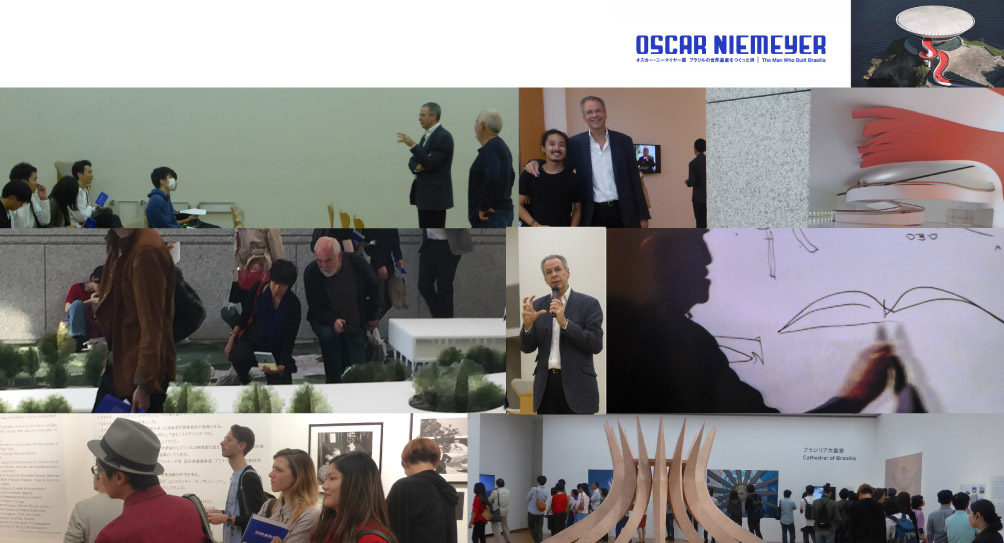 A passionate architectural aficionado, André do Lago provided an enlightening introduction and guided us through the exhibition, skilfully set up and curated by MOT's Yuko Hasegawa and SANAA's Kazuyo Sejima and Ryue Nishizawa. 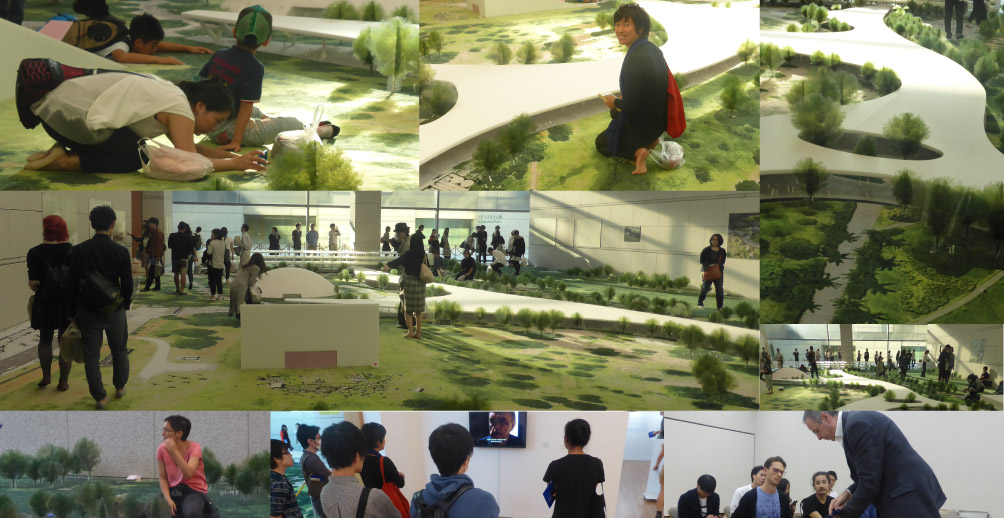 co+labo's collaboration with André do Lago and the Embassy of Brazil, which started with our urban research pavilion in front of the Embassy in Aoyama during the football World Cup in 2014, continues.
colaboradović.blogspot.com will keep you posted about our ambitious plans for future collaboration.
Posted by MIAW studio Radović at 4:45 AM No comments: