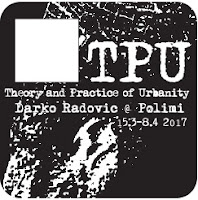 For the second year in a row, Darko Radović was invited to teach at Politecnico di Milano. After the fun of MIAW (Milano International Architecture Week 2016), He was asked to deliver, as a Visiting Professor at Dipartimento di Architettura e Studi Urbani - DAStU, an intensive Contemporary City Course, a full semester of workload for himself and the students within one month. Darko chose to bring a completely new version of his Theory and Practice of Urbanity (TPU, the  original of which, dating back to 2007, is still accessible at the web pages of the University of Melbourne - here). The overarching aim of TPU 2017 was to explore the potential of cross-cultural comparisons, to critically address the issues arising from cultural specificity and difference in and of urbanity, the (im)possibility of translation and equivalence, bringing to one of the best European Universities some of the work conducted and developed at Keio, in co+labo radović.


The Course, which unfolded at Leonardo da Vinci Campus from 15 March to 9 April 2017, consisted of two intertwining programmes: the lectures (delivered in a variety of formats by Darko and his guests) and the “workshop” (a fieldwork component inspired by Debordean dérive and self-managed by the students), which included heuristic drifts into concrete urban realities of Milano and follow-up discussions and conceptual thinking about its likely and desirable urban futures.

Darko has introduced TPU through an overview (fully presented, with a reason, he says, in Typewriter font) by referring to

several important thinkers and key ideas which inform and shape his current research and, in particular, this particular lecture series. The opening six of his intellectual accomplices were (alphabetically organised) Roland Barthes, Bogdan Bogdanović, Guy Debord, Felix Guattari, François Jullian, Henri Lefebvre and Jean-Luc Nancy, serving the smördâsbord of ideas (below) to begin with.

The guest lecturers were asked to focus at the particular, freely choosing the theme which best introduces "their" city (for the majority, “My Milano”). The tenor of their talks, which last until the very end of TPU 2017, ranged from purely autobiographical sketches to academic discussions, weaving the personal and anecdotal together with historical facts and theoretical concepts. The formats of delivery varied accordingly, from the strings of short cameos to standard academic presentations. This TPU thread sought to contribute to the creation of a relaxed but, at the same time, firm, well-informed, creative and critical atmosphere within the class.
The first of TPU 2017 guests was a "secret" one - Kazuyo Sejima, who is nowadays also a Professor at DAStU. Her unannounced presentation hinted at Darko's hope that TPU will keep on generating pleasant surprises. Sejima-san's talk about her projects included the new Bocconi University Campus (currently under construction) in Milano.
Her lecture  was followed by Professor Davisi Boontharm (Meiji University and Keio) and the story of her city, Bangkok, by focusing at what makes the neighbourhood and at the importance of childhood memories in definition of both the community and the self.
Within TPU, Davisi also delivered lectures on her fieldwork annotations "sketch and Script" method, latest research on urban requalification, and presented her current artwork, as it was being produced in Milano (see below).

The next guest speaker was Dr Mario Paris, also a TPU 2017 Teaching Assistant. Mario's Milano is a city of elastic boundaries, which tempts one to agree with Massimo Cacciari that "There is no city, only urban ways of life." Mario used the Atlante dei Classici Padani to bring in a series of  themes which make "a real Milano", one which escapes the preconceived imagery of Italian centrality and urbanity, taking the audience along the edges of the ubiquitous non-place highways, all the way to the realities of one of the most recent mega shopping malls in the region.

Professor Gabriele Pasqui, a native of Milano and Director of DAStU, started with an "academic introduction", using maps to explain and problematise the past and present development projects, trends and dilemmas of Milano. He brought the audience into the actual fabric of the city by introducing nine houses and neighbourhoods in which he lived in his city.

Professor Antonio Longo, another true Milanese and renown urbanist, introduced the fine fabric of surrealist imaginary explorations of Milano, as see by various artists and other creative residents and visitors of this city (ranging from Mario Sironi and Vittorio da Sica, via Emir Kusturica to Savino and Savinio), overlaying them with ideas and plans about desirable development directions for the Lombardian capital (by the likes of Dino Buzzati, Giancarlo de Carlo, Boeri and, most recently Ferraresi et al., to some of which Professor Longo himself contributed).

The next in the TPU "My Milano" series was Professor Gabriele Masera, from Politecnico's ABC programme. Two years ago, Gabriele was a visiting professor at co+labo and Keio Yagami Campus. That enabled him  to make interesting comparisons between urban cultures of Milano and Tokyo, leading to an erudite overview of complex development of Milano, from the earliest traces of Celtic settlements to the latest ideas about the future of the fascinating city. What emerged was the city much more marked by destruction and the Fenix-like moments of radical remaking and reinvention (even of its "natural" features). Precisely that defines a critical difference between the Lombardian capital and the majority of other Italian urban centres, the identities of which tend to be grounded in continuity and lasting of their physical structures.

On 31 March, TPU hosted two guest speakers. The first to speak was Professor Bertrando Bonfantini (a coordinator of the Contemporary City Programme at Politecnico) who introduced his Milano as a series of itineraries and narratives, and as a city which needs to further advance through introduction of the new "narrative infrastructures" for future urbanity. His focus at four major urban projects, Santa Giulia, Portillo Nord, City Life and Porta Nuova brought together the stories about development ambitions in the recent history of Milano, their various failures and successes, discrepancies between what was planned and designed, and what was realised - where accidents often brought gain, rather than any qualitative loss. Combining his expert views and well argued opinions, Bertrando emphasised how Porta Nuova project, for instance, with all of its controversies, is one of the projects with special potential to contribute to the broader public good, precisely because it stitches together the string of diverse parts of Milano in one, continuous narrative of pedestrian scale.

The second guest speaker was a young researcher from Barcelona, Gloria Serra Coch. She spoke about Barcelona of a native, an insider for whom living in the great Catalan capital, a must-visit tourist node of global fame, entails strong sense of living in a village, surrounded mainly by familiar places and faces. Over time, such personal, finely knit networks expand to form patchworks of lived fragments, never acquiring a sense of systematic whole. Gloria ended her talk by tabling a number of profound questions, including the provocation which Barcelona itself so forcefully puts forward: have we "condemned functionalism to fast"? Or, in other words, isn't the Cerda's plan, a perfect example of the much maligned, top-down imposition of strong geometrical layout and order, an example of resilient urban structure which works extremely well, one which keeps on reinventing itself while, somehow, keeping that strong, established identity?!

Professor Marco Imperadori's Milano was the one of recent the EXPO 2015, and pavilions - Save the Children, Island Countries, UK and Japan - to conception, design and construction of which he and his team have variously contributed. Marco's special emphasis was on the legacy of that event, stressing how his interest is not only in history and present of Milano but equally for what is coming up, as Milano always was and it remains an "impermanent city, always changing."

Somewhat similar was the focus on Bologna, chosen by Luisa Bravo and Simone Garagnani, partners in life and partners in research. They presented some of their investigations in the city where they live. The lens of their research pulls together Luisa's urban design sensibility and Simone's passion for technology and complex representations of spatial quality. They are both closely associated with co+laboradović, and their presentation, of projects such as "Upgrading Bologna 2.0", "Le Bologne Possibili", "Mapping Urban Perception", closely resonated with some of Darko's own points within TPU.

Mina Akhavan, one of Teaching Assistants of TPU 2017, talked about her Teheran. In explaining "The Paradox City of Cities", Mina delved into some of the stark contrasts of the Iranian capital juxtapositions of the mountain and the flat Teheran, the Teheran of the rich and the Teheran of the poor, the city of Architecture and "the city of no-Architetcure", the city of green infrastructure and that of grey infrastructure, of Fordism and of post-Fordism, religion and irreligion, all together forming a puzzling and fascinating kaleidoscope, another kind of urbanity and otherness, into TPU 2017.

The final guest lecturer in TPU 2017 was Leonardo Zuccaro Marchi, who teaches urbanism at TU Delft. He made a special visit to Milano only to deliver his talk on "The Heart of the City - Milano Killing the Modern". Leonardo's erudite cross-referencing of concrete realities of Milano and some of the key events in the history of the Modern Movement, with special emphasis on CIAM 1951 and the concepts of the hollow core, social presence and continuity provided a fitting ending to the series of the rich guest programme of TPU.

TPU was designed to end, but not conclude. The aim of the course was to help the participants to take off, to elevate intellectual aspects of their discourse about the cities and to enhance the capacity to think critically and creatively. A major contribution to that and contribution to an ending which helps the course exceed itself was the exhibition by Davisi Boontharm, "Unfolding Navigli". Davisi presented several (un)foldable notebooks, with sketches from the reemerging canals of Milano, in which she beautifully combines the talent and sensibility of a mature artist with keen and experienced focus and logic of an urban researcher, to achieve a provocative and open-ended synthesis of both aesthetic and documentary quality, opening the spaces which she chose as of special significance in the city to new readings. 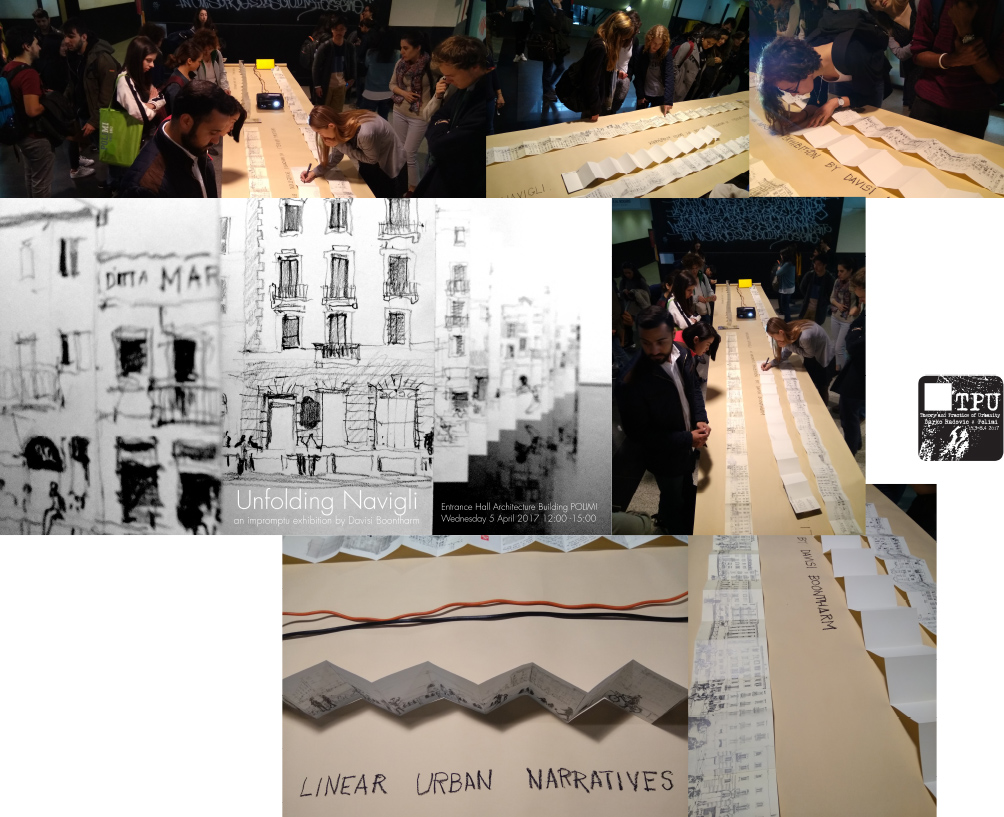 In order to further stress the non finito character of TPU (first hinted upon in design of the limited-edition stamp) the very last session, held on Saturday 8 April 2017, was just another TPU "horizontal exhibition", a moment to step back and contemplate together the rich diversity of qualities of Milano, as seen by the TPU 2017  students. ... That was TPU 2017. 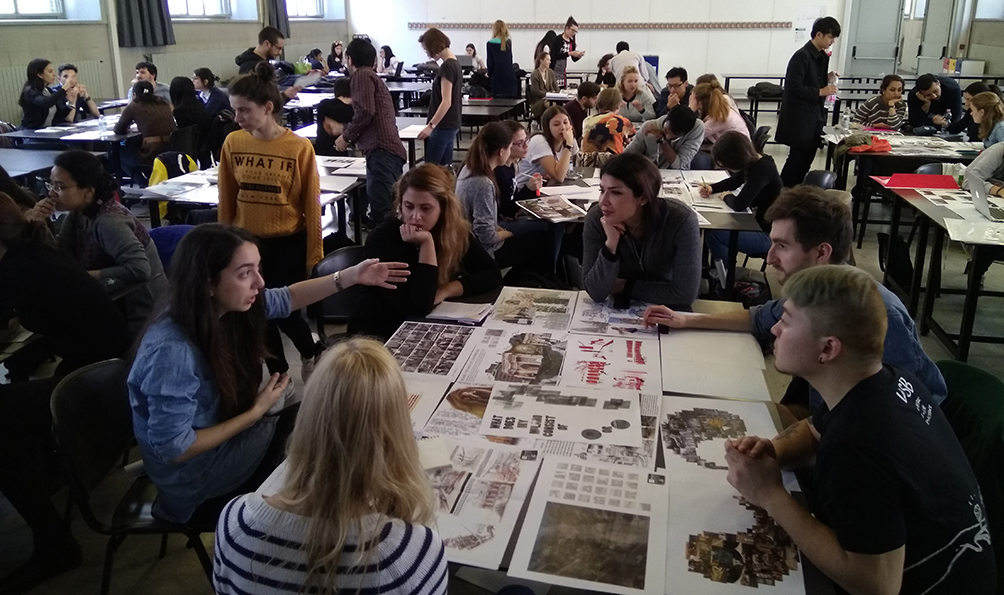