This year co+labo continue its practice of contribution to carefully selected design and design-research workshops. In September 2018, co+labo members participated in several intensive events in Japan, the UK and at the Adriatic islands of Vis and Lastovo in Croatia. The grand finale will be at the Architecture Biennale in Venice. To begin with, just a brief note - those workshops do interrupt another important activity (see below) ... as before ...
co+labo undergraduates - Iwata Amami, Kawamoto Jumpei, Nishibori Shinichi and Shigemura Hiroki have arrived to the city of Split, for what has since 2011 become a regular, annual introduction to the beauty and challenges facing the original, Mediterranean urbanity, before heading towards Vis and a mini-Symposium aimed at setting the agenda for future Anatomy of Islands workshops, and more.
Below - an impromptu lecture at the famous Peristil, the very place form which the Emperor Diocletian used to address his army and the people, and a ferry departure to Vis, against the backdrop of one of the most impressive urban vedutas.

co+labo radović New Issa - a World Centre for Island Life and Cultures mini-Symposium 1
The Vis 2018 Symposium, was conceptualised as an heuristic, intellectual dérive into the future of islands in general. The original idea of the World Centre for Island Life and Cultures was introduced by the founder and intellectual leader of the Anatomy, Boško Budisavljević. Besides co+labo, Keio University Professors Darko Radović and Akira Mita, and Professor Davisi Boontharm (Meiji University), the participants of the mini-Symposium include staff and students from the Faculty of Architecture, University of Ljubljana, L'ENSA Paris-Val de Seine and a number of independent contributors.
co+labo radović  co+labo students took part and awarded @ Ise Workshop in Mie, Japan

Daisuke Kobayashi and Takuomi Samejima have completed participation in a week-long architectural workshop in Ise city in Mie prefecture which focused at designing and building a 3x3x3 meters big folly besides the famous Ise Shrine. co+labo students joined two groups, each of which was composed of five students from several Japanese Universities. With their folly, which was composed of two torii gates facing Geku and Naiku Shrines (above) Kobayashi-san's team has won the Second Prize. Congratulations to Daisuke-san and others (with a Diploma, on the photo below).

Samejima san’s team's folly, which took task to express anima, a Japanese spiritual word used for expressing the power of objects (see a fragment, below), has received very good comments and recognition. 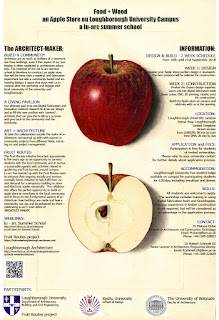 From Ise, Takuomi Samejima was joined by Norimi Kinoshita at the Food+Wood Apple Store lu-arc summer school, which is being held at the Loughborough University Campus.

A very interesting project was initiated and organised by an old co+labo friend and associate, Dr Maytas Gutai and besides the host university and Keio participants include staff and students from Faculty of Architecture from the University of Belgrade and Kyushu University, School of Design.


In line with co+labo values, the invitation reminds how "architects are as much as builders of a communities than buildings, even if this aspect of our profession is often neglected in architecture education. The intention of the 1st lu-arc summer school is therefore to construct an apple store that will be more than a material and fabrication experiment but also a community based and enhancing design: a space that stays with us in campus after the workshop and engage with local community of the university and Loughborough. ...