co+labo radović Tuesday@co+labo 2: Dan Hill, The Battle for Infrastructure of everyday life
And, on 27 November co+labo hosted a very special guest from the UK, Dan Hill (below). Dan is an Associate Director at Arup, and Head of Arup Digital Studio, a multidisciplinary strategic design team.

A designer and urbanist, Dan’s previous leadership positions have produced innovative, influential projects and organisations, ranging across built environment (Arup, Future Cities Catapult), education and research (Fabrica), government and social innovation (the Finnish innovation fund, SITRA), and media (BBC and Monocle), each one transformed positively via digital technology and a holistic approach to design. He has lived and worked in the UK, Australia, Finland and Italy. Besides that, Dan is also a Visiting Professor at UCL Bartlett Institute for Innovation and Public Purpose in London and an Adjunct Professor at RMIT University in Melbourne and University of Technology Sydney. Dan is also one of the Mayor of London’s Design Advocates. Amidst much published work, in academic journals, books and media, he is the author of the influential book “Dark Matter & Trojan Horses: A Strategic Design Vocabulary” (Strelka Press, 2012) and since 2002 has written the groundbreaking blog, City of Sound. And ... more. What is truly exciting about Dan Hill is that he is an incarnation of co+labo's + ++ +  +++ principle. 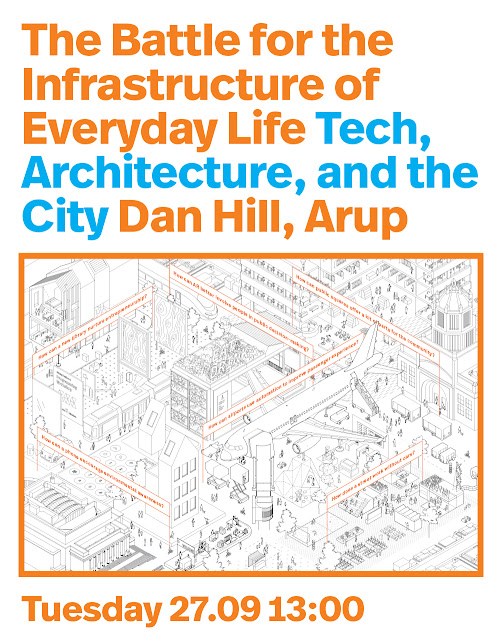 The synopsis of his lecture, Dan says, could go "something like" this: "Our cities are paused in front of several different alternative futures. One we might describe as ‘business as usual’, which is actually a slow, unthinking drift from 20th century systems into those of shaped by 21st century ‘big tech', in which we are unprepared, ill-advised and increasingly subjugated by individualising technologies applied at urban scale. The other city we might describe as full of the possibilities of similar-looking but actually quite different 'networked urbanism', engaged with consciously, deliberately, and by working with the dynamics of systems for civic and public outcomes. It implies a quite different form of city-making, enabled by a convergence of contemporary approaches such as building fabrication, robotics for maintenance and construction, autonomous mobility and logistics systems, shared super-local energy systems, advanced manufacturing and AI, super-green safe streets and truly shared living spaces, all calibrated by carefully redesigned decision-making cultures. This is where the real invention is required, the true design agenda: how do we re-appropriate these technologies in a way that reinforces the idea of the city as a public good, not a mere collision of private ones? This richly illustrated talk will describe a diverse array of projects, techniques and approaches from projects and practices all over the world." (a poster was designed by Dan Hill)
Posted by MIAW studio Radović at 3:43 AM