Satoshi Sano, who is with co+labo since its inauguration in 2009, opens TAUD 2O2O Special lecture Series on Tuesday, 26 October with his discussion of his design and design-research within Eureka, an award-winning practice which its members describe as "collaborative team of architectural planners and designers, structural and environmental designers". 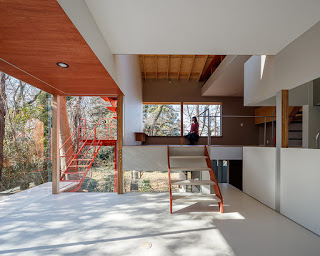 For TAUD 2O2O, Sano-san explains spatial compositions  of his architecture  by referring to influences of Hans Sharoun and Carlo Scarpa. He says how, "based on the hypothesis that the spatial residue (poche) in Hans Sharoun's organic space is an element that creates an organic spatial composition, we find how to create and design the residue. In Carlo Scarpa's space we focus on multiple, diverse floor levels, and find how to design floor levels as a starting point for people's actions. Herman Hertzberger's ideas about architectural space also features in projects of Eureka, especially when it comes to the relationship between spatial elements and composition and people's actions.
Posted by MIAW studio Radović at 1:34 AM