On 31 August, Darko delivered a key-note address to the Conference of European Architectural Education Association, held in Bordeaux. On the occasion of the 40th anniversary of EAAE, the focus of the Conference was on teaching and research activities that European schools developed with their partners beyond Europe's borders. 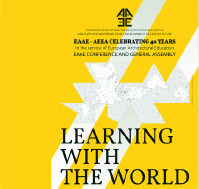 This invitation was in recognition of Darko's experience and research in that field, with initiative coming from the École nationale supérieure d'architecture et de paysage de Bordeaux, with whom he collaborated in an exciting research into architectural and urban design education Bangkok-Melbourne-Bordeaux BMB (2003-5), the results of which were published as Cross-cultural Urban Design, global or local practice (Routledge).
Darko’s talk to the most illustrious of academic audiences in the field of architectural education started by referring to, and reflecting upon some of his own experiences of immersion into diverse teaching and learning practices in the fields of production of space. A special emphasis was on Japan and his rare, internal perspectives of the Japanese academia. As the first foreigner professor of architecture (Keio) and urbanism (Tokyo) ever at the two oldest universities in the country, over the last ten years Darko could not only observe, but also get involved and contribute to the arguably unique ways of thinking and making architecture in Japan. Those experiences deny routine, and demand constant rethinking of the fundamentals of the subject thought and investigated - and co+labo and Keio Architecture were at the very centre of presentation.The talk was deliberately polemological, crafted in hope to, in de Certeau's way, “force theory to recognise its own limits”.
The main aim of the address was to acknowledge and celebrate diverse, situated knowledges, and too point at risks inherent to any foreign intervention - even when careful and best intended.

(illustrations in this post: strips of slides form Darko's presentation; photos by EAAE)

Posted by MIAW studio Radović at 10:09 AM