As regularly reported on this blog, since 2012 co+laboradović is participates in the top quality symposia and workshops Anatomy of Islands, which are regularly held at the Croatian island of Vis. The Anatomy, initiated by the well-known urbanist Boško Budisavljević who lives at the island, is co-organised and managed by a number of motivated individuals and enthusiasts, local groups and local government – all joined by strong desire to imagine and create better, place- and culture-specific futures at, and for their island.
Each September, through presentations and robust discussions between the locals, visiting academics, professionals and good-willing visitors, Anatomy of Islands symposia provide venue for sharing and advancing diverse knowledges about opportunities for alternative development and production of space at this and other, comparable islands.
Inspired by the symposia, the Anatomy workshops burst with creativity, driven by fine mix of international students and academics from both the near-by and far-away universities – from the Universities of Split, Zagreb and Ljubljana, via Graz and Paris, to Tokyo. Over the last three years, co+labo also contributed to that mix by inviting to Vis a number of our friends and close collaborators – Davisi Boontharm (Keio and Sophia University, Tokyo), Kengo Kuma and his laboratory from the University of Tokyo (which, along co+labo students, participated in all three Anatomy of Islands conducted so far), Kazuyo Sejima (Keio and SANAA), Jose Puppim de Oliveira (United Nations University, Tokyo), David Sim (Gehl Architects, Copenhagen), Luisa Bravo and Simone Garagnani (Universities of Bologna and Florence).
These workshops advance design-research practice by inviting brave, explorative and, at the same time, concrete, realistic thinking and action that can challenge development patterns which destroy environmentally and culturally precious, fragile environments worldwide.Three generations of co+labo have contributed to those efforts so far, and we stay committed to this valuable project.
Fine design work produced within the Anatomy of Islands workshops in the period 2012-14 has generated an interesting exhibition. After the inaugural presentation in Zagreb, Croatia in February 2015, the Anatomy of the Island exhibition is now in Graz, Austria. We hope to host it in Tokyo, soon. 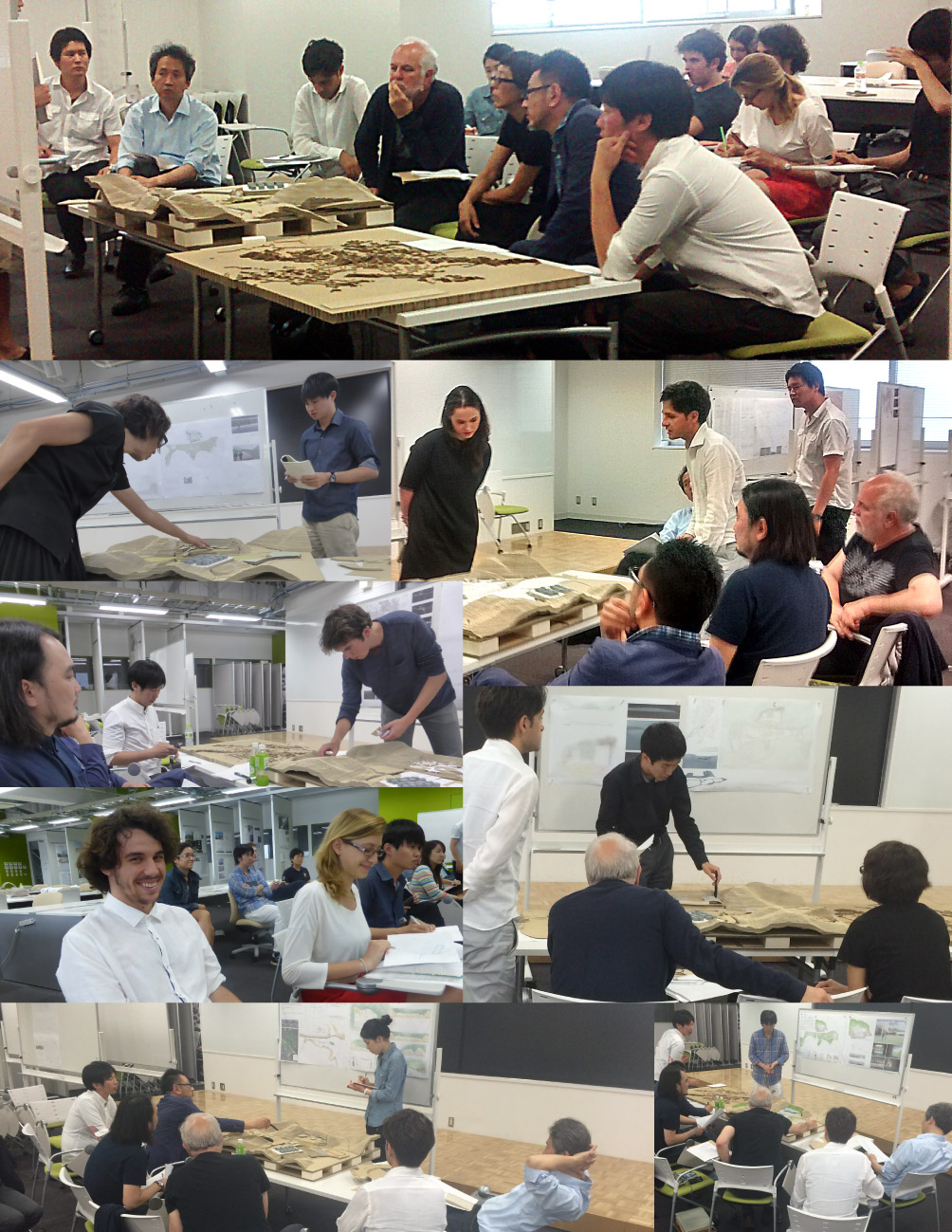 What is special for us is that more than half of the enrolled 19 students in semester 1 2015 are from co+laboradović. What is also new is that international students from Radović and Almázan Laboratories make this studio the most culturally diverse in the Faculty - ever. We see this as another important moment, a small but significant contribution to Keio’s Top Global University ambitions.
Posted by MIAW studio Radović at 6:40 AM 3 comments:

In late May, co+labo took part in two exciting events in Rome – BiennaleSpazio Publico, which was hosted by Universita Roma Tre, and an International Symposium and Exhibition MaPS@MAXXI, held at the Museum of Art of XXI Century. Keio University was represented by Darko Radović and Davisi Boontharm (Keio and Sophia University), co+labo research students Wakataro Ueno and Sotaro Miyatake, and Sunao Yamaguchi from Mitsukura Laboratory (with which, since Measuring the non-Measurable research project 2011-14, co+labo collaborates on development of ways to better understand complex relationships between the quality of urban and architectural space and human emotions). 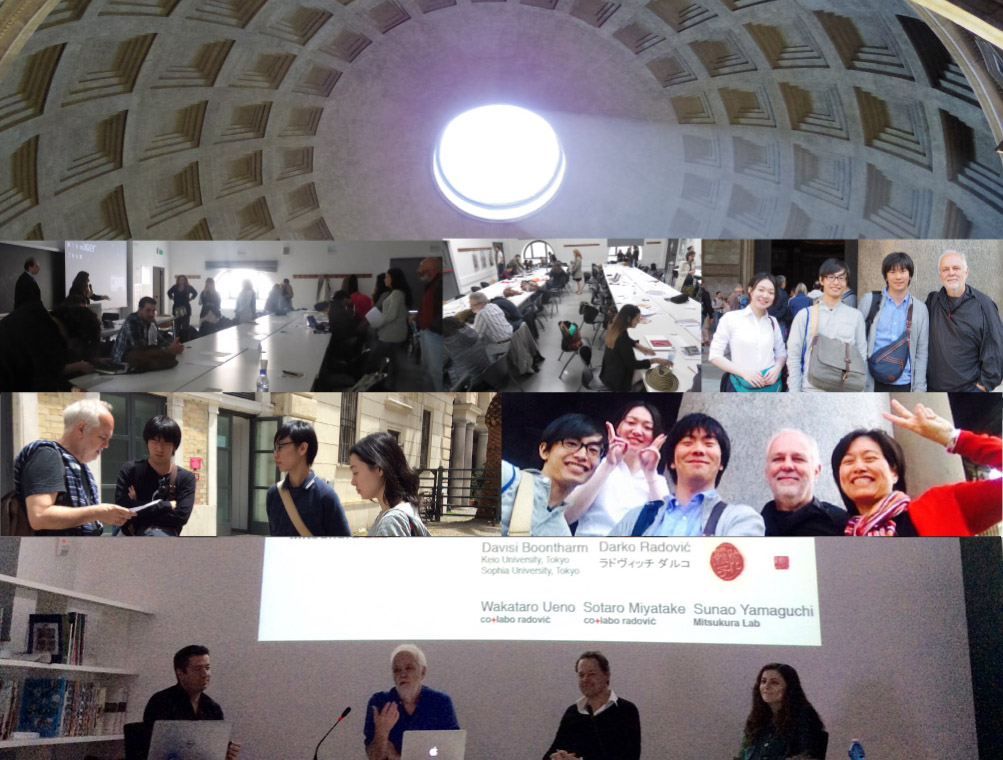 At Biennale, Darko and Davisi contributed to lively discussions within the session Public Space, Places and Practices of Everyday Life - Conversazioni sullo spazio pubblico, while the team of students was exploring the performance of EEG (electro-encephalograph developed in Mitsukura Laboratory) in detecting emotional responses to both real and variously represented (in Biennale exhibitions) urban and architectural spaces. 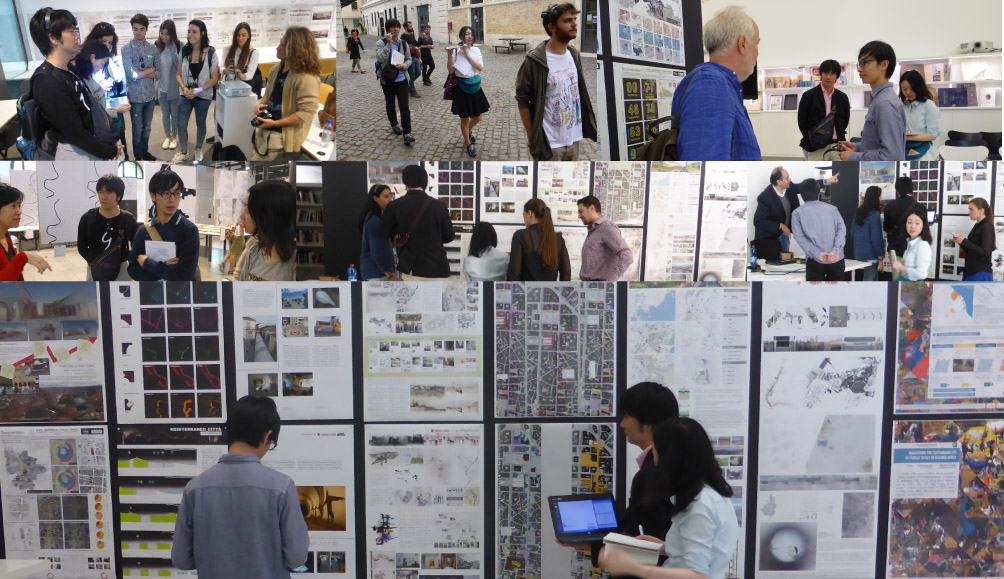 At MAXXI, co+labo contributed to the Symposium with the paper entitled “On quality of public (or, not-so-public) spaces in Tokyo - making, living and exploring Kuhonbutsugawa Ryokudô” and two posters – “public, not-so-public, livable, lovable spaces and other peculiarities of Tokyo”. co+labo posters were part of the MaPS@MAXXI exhibition, which was curated by Luisa Bravo (Italy) and Manfredo Manfredini (New Zealand). The exhibition included presentations of the cities of Athens, Auckland, Bangkok, Brisbane, Buenos Aires, Byblos, Changsha, Genova, Hong Kong, Jerusalem, Mostar, Moutallos, Nicosia and – Tokyo. Those exhibition provided physical setting for an exciting MaPS@MAXXI Symposium. co+labo radović and Mitsukura Lab students have also used the exhibition to further advance our understanding of various opportunities and constraints for using EEG for assessment of graphically represented quality of architectural and urban space. Inputs from the experiments from both Biennale and MaPS@MAXXI will help Radović and Mitsukura Laboratories in further joint research. 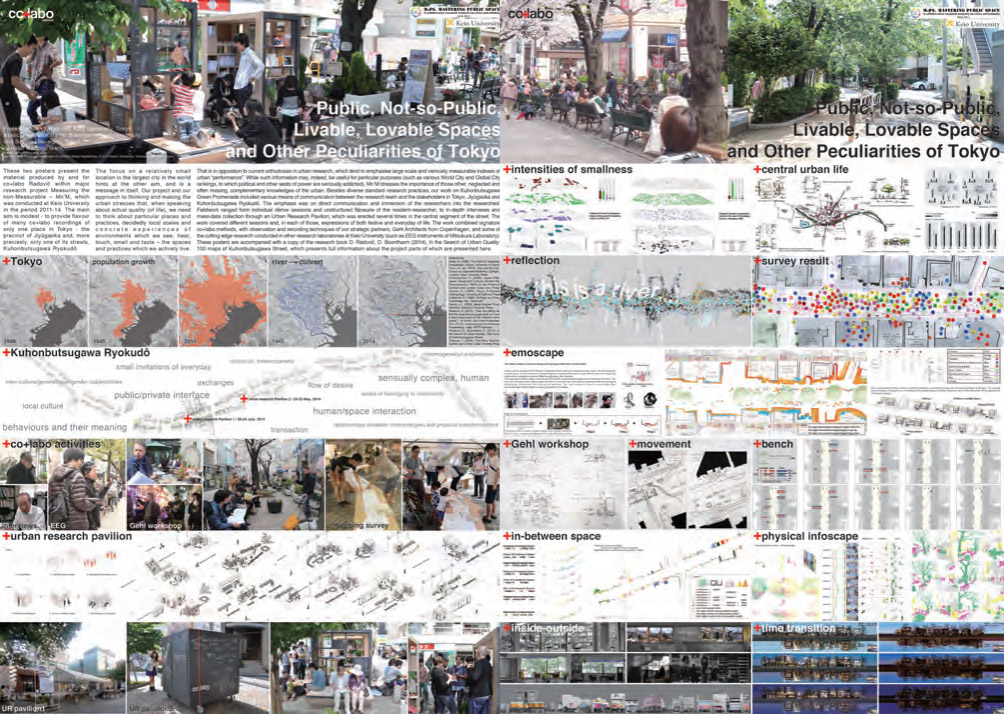 La Biennale and MaPS provided the participants with opportunities to learn about the best and the latest in production and thinking about public space and facilitated development of new contacts and academic friendships, and co+labo radović stays open to further initiatives by City, Space, Architecture – an enthusiastic organisation whom we have first met at their excellent Past Present and Future of Public Space Conference in Bologna 2014.
Posted by MIAW studio Radović at 5:22 PM 3 comments: