co+labo is an international laboratory. Even at the times when all of our activities were conducted in the laboratory at Keio Yagami Campus, due its general structure, make-up and members we have simultaneously operated across at least a couple of continents. co+labo was designed to, precisely in tune with the old adage, think globally while always acting locally, operating with the heightened sensibility to, and responsibility towards the exact places.

In these crazy times of Corona Virus pandemic, we have found ourselves literally stretched across two continents – Asia and Europe. Amidst an academic trip, which included lectures and an exhibition at the University of Ljubljana (images at the bottom of this post) and discussions about the planned September workshop, Darko and Davisi have found themselves stranded in Split (above the title: captured by public WebCam at an empty Riva, the main seafront promenade; above: equally, eerily empty but irresistibly beautiful Peristil of Diocletian Palace and the nearby Fruit Square/Voćni Trg).

At the same time, the rest of co+labo members are in Tokyo. With start of the new school year postponed and Keio Campuses closed, all our activities have moved online. Despite these extreme conditions, co+labo operates (almost) as planned. As we do in the Spring semester, these days the key focus is on design. Under the guidance of our honorary guest Bratislav Gaković (award-winning architect from Belgrade, with whom we have already collaborated at an exciting workshop in Manchester, in 2012), new co+labo Research Fellow Rafael Balboa, and Sano Satoshi and Darko Radović, almost all members are involved in an international professional competition. How does all that work? See above: at the ZOOM screenshot, left to right, in the first row are Rafa, Shigemura, Braca, Mori; in the second row: Oguri, Nishibori, Kawamoto, Sasaki; in the third third row: Sano, Yang, Iwata. Next to them, on the right side are two lonely co+labo PhD candidates, Sanja pondering over some important issues related to the street art, and Ivan - adding final touches to his Thesis. Darko’s (a bit less tech and a bit more messy) coordination table is - next to the (empty) Fruit Square.
+

Below ... Darko's lecture and Davisi's exhibition and lecture at the Faculty of Architecture, University of Ljubljana - where they are Visiting Professors 2019-20. 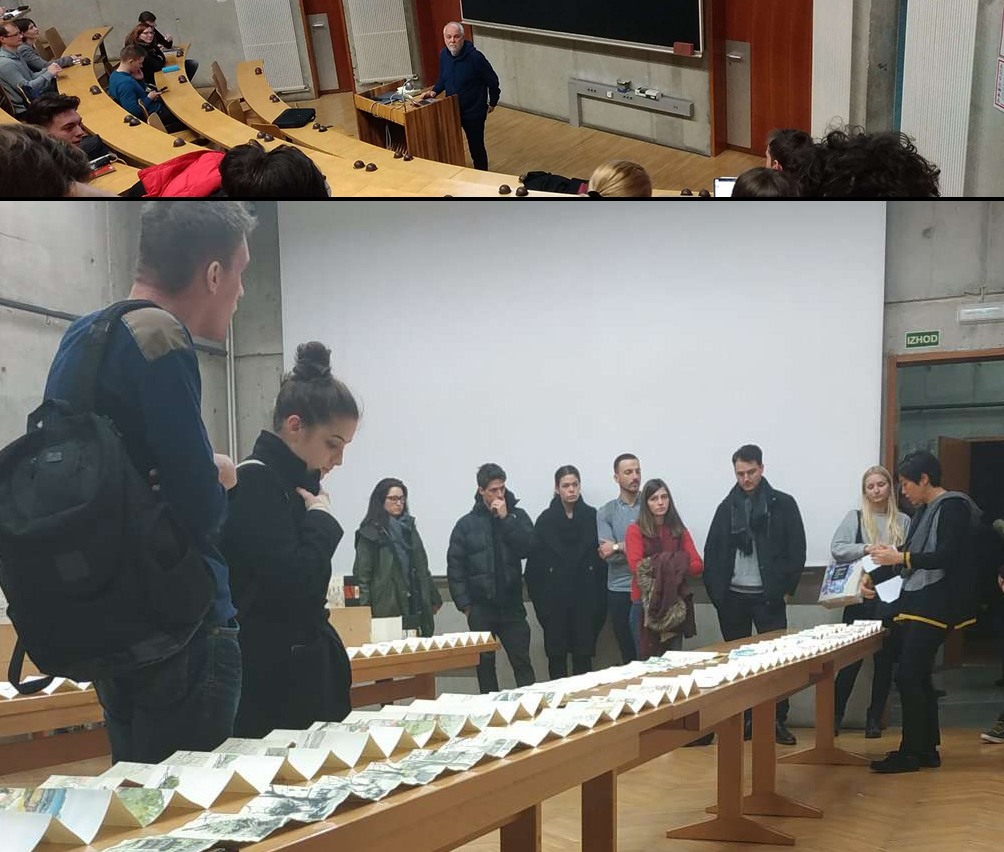