Suzuki-san's presentation, a first ever Keio Double Degree in the fields of Architecture and Urban Design (in collaboration with Politecnico di Milano), marks a very special step towards the establishment of Keio Architecture.
(further updates on these projects will follow shortly)
Posted by MIAW studio Radović at 5:24 AM 4 comments:

Kobayashi Daisuke and Kinoshita Norimi have received an Honorable Mention at the Haseko Residential Design Competition for their proposal for a Housing Complex Connected to the Surrounding Vacant Houses. The Jury, which was chaired by Kengo Kuma (above) and included Kumiko Inui, Sousuke Fujimoto, Shin Aiba and Kazuo Ikeda recognised the qualities of their 東京開墾 - Tokyo Reclamation concept, which proposed radical introduction of urban agriculture and partial reuse and requalification of the existing building stock (see below). That approach questions the entrenched Japanese scrap and build practice, introducing a number of themes fundamental to co+labo practices of eco-urbanity and radical realism.

Posted by MIAW studio Radović at 5:05 AM 4 comments:

In the period 2012-16, following an invitation by Boško Budisavljević, the initiator and organiser of the Anatomy of Islands and his team, co+labo radović took part in an exciting series of symposia, workshops, exhibitions and various accompanying events at the beautiful Adriatic island of Vis. Those were five true festivals, not only of learning how to make, but actually helping make some of the places on the island better. co+labo also assisted in making the Anatomy more international, by inviting Kengo Kuma and his laboratory from University of Tokyo (who took part in all five Anatomy events), Kazuyo Sejima, and several young Japanese architects (the likes of Tetsuo Kondo, Satoshi Sano, Koh Nakamura) and university professors to join us and help make the events even richer. Davisi Boontharm devoted two of her exhibitions to Vis, and for the final, fifth Anatomy on Vis, with Keio Kobayashi Laboratory and assisted by Politecnico di Milano, we have helped make the Japanese Pavilion - and left it to the town of Vis to enjoy and to care for. 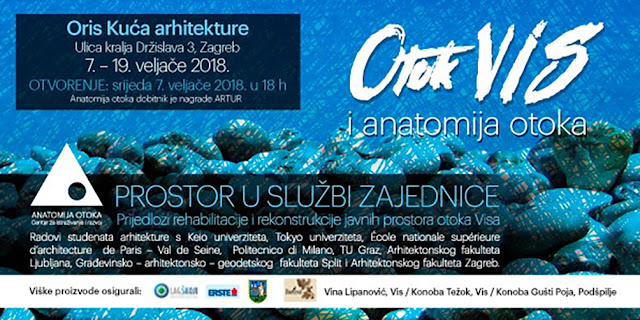 The retrospective exhibition, to be held at Oris House of Architecture in Zagreb 7-19 February 2018 under the title Space in Community Service both celebrates the achievements of the Anatomy of Islands and, in a typically Boško's activist way, points forward - towards what could have been done and what should be done in order to help the Island capitalise on an undeniable quality of the results generated by this unique project. If you are not far form Zagreb, do visit and enjoy this exhibition. Below: Boško Budisavljević, at the opening of the exhibition.
(The exhibits were designed by Croatian designer Boris Kuk, who participated in co+labo's project Measuring the non-Measurable and helped produce one of our books about the qualities of space and life which escape easy quantification.)