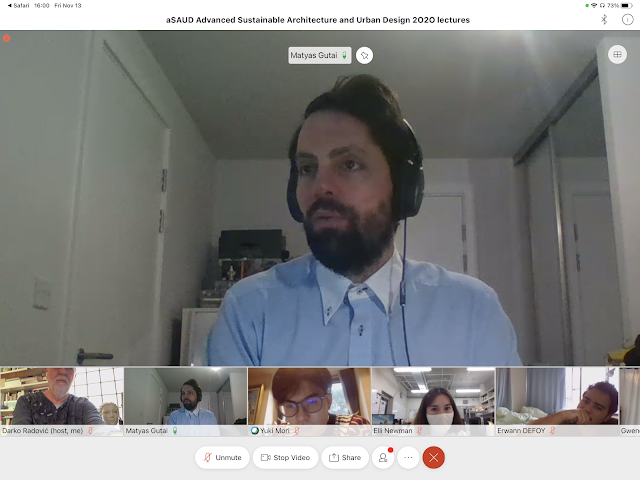 aSAUD students have lived up to expectations, responding with interest and passion to the final in a series of excellent lectures delivered by Matyas Gutai, our Special Guest from Loughborough University. The final lecture reached crescendo by touching upon the largest, urban scales and detailing some probing examples of possible paths towards the more sustainable world. The ensuing discussion has not stayed at technical and spatial themes, but reached towards the associated philosophical issues, the questions of ethics of sustainable design, the dynamics of control and freedom, tradition and anti-traditionalism, and more.  That sets an excellent platform for successful completion of TAUD 2O2O, provides students with much needed inspiration and courage not to be shy when entering their next project. Thank you, Maytas and we will continue this collaboration though co+labo and co+re networks.
Posted by MIAW studio Radović at 8:05 AM 30 comments: 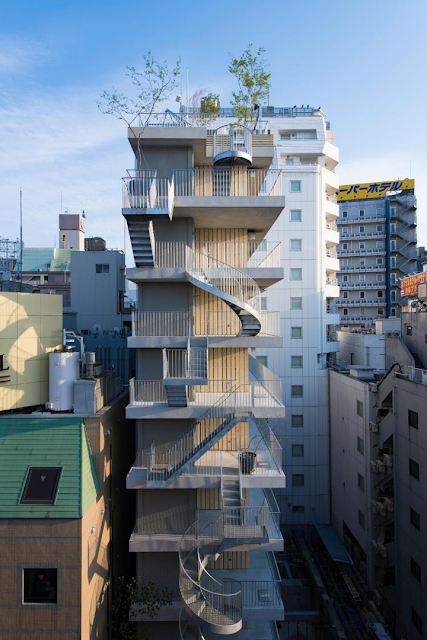 After graduating from co+labo in 2011, Takei-san joined Mt Fuji Architects Studio, and stayed working with Masahiro Harada+Mao ever since. The title of his TAUD 2O2O lecture is "design process of Hotel Siro - about concept". In his introduction Takei-san says how he approached this lecture as an OB, relatively close to everyone in and around co+labo , and talks about his personal experience with "engaging in design at an atelier based design office. I will talk about how exactly my latest project, Hotel Siro in Ikebukuro was developed.

The site is about five minutes of Ikebukuro station. The frontage is narrow, surrounded by a multi-tenant building and a love hotel. It is a corner facing north. From the situation of the site, one can feel psychological, more than logical connection with the city and the street. The planning evolved on under the concept of "hotel to stay in the city". The building was completed in April 2020, and the process consisted of ten months of design, an application and estimation period which took six months, and one and a half long construction period. What are the designers doing over that long period? In a shortest, we thoroughly consider and decide on "everything" that is related to design and usability. What we call basic design takes a quarter of the total work. The remainder focuses at a study and decisions regarding the dimensions, materials, and details of each part. That a concrete and very detailed work. We also, occasionally, negotiate with various government offices and agencies the interpretation of relevant laws and regulations.

While thinking about what kind of stance should be taken for this detailed and raw work, for us the "city" was consistently at the center. By standing by the keyword "hotel to stay in the city" we were able to keep direction and set pace in completing the project. From my personal position, rather than that of the staff member in a design office, I have been wondering if I needed such keywords when I was a student. Many work without their own design concept. That is hard to explain, but too many important things were there to spill out of the concept. In my case, this seemingly unanswered question has been heavily influenced by Mount Fuji's textbook, since the times when I was a student. I have also learned a lot from Jun Aoki’s writings.

In any case, the lack of an organised disorganized story is a problem, for both those who want be designers and those who don't. I hope that my presentation helps students in their thinking. 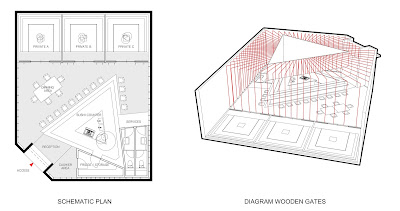 As our visiting research fellow in 2020, Rafael Balboa of Studio Wasabi was a regular speaker at co+labo. His TAUD lecture broadens his already significant contribution to all undergraduate students of architecture at Keio's SD Engineering. Rafa's lecture is entitled "Studio Wasabi Architecture: recipes for a perfect flaw". He explains how “The word is in romance with success”, was once the start of a talk session between its director Brett Steele and the American architect Mark Wigley about failures at the Architectural Association (AA)  Success in the creative fields (if not to say any other body of human knowledge) is in fact intimately entangled with failure. Almost in a masochistic fashion, architects struggle today submitting several ideas for competitions, in order to have very few of them built. In his book The Architecture of Failure how Modernism Douglas Murphy emphasizes the “suppressed, ignored and denied failure in the way we design our cities”. 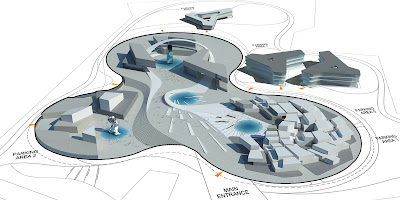 Today, the failure has simply become a common ground for anyone who attempts to innovate. Hence some fundamental questions arise. Is architecture repressed only in the built environment that we experience or rather in the very concepts and ideas that generates such environment? What is to learn in the cognitive process of creating something?

Under such theoretical frame, the lecture will revise some of the un-built projects of our practice, creating a narrative around the sketches and preliminary ideas that lead to a final proposal. Moreover, it will elaborate on the lessons embedded in the creative process, addressing the thesis that it is only through failures that we can start to understand success, or better rephrased, redefining the very idea of failure in our contemporary material and intellectual culture."