co+labo radović co+labo Guest Lecture by Professor Ronan Paddison, Glasgow University
Ronan Paddison, an Emeritus Professor at the University of Glasgow visited co+labo, and delivered a guest lecture "Revisiting ‘The Rise and Rise of Culture-Led Urban Regeneration" within Darko's Masters Course on Advanced Sustainable Architecture and Urban Design - aSAUD. The emphasis was on how culture, in its different guises, has become a key trope through which cities are being regenerated, and how culture-led regeneration has become deeply connected with urban design. The discussion, which  concluded through viewing how public art can contribute to place-making, included invited Professors Davisi Boontharm (Meiji University) and Hiroshi Okano (Osaka City University).

Posted by MIAW studio Radović at 8:03 AM 4 comments: 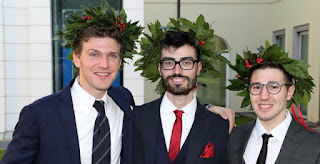 As part of an established  exchange of students with Politecnico di Milano (Antonella Colistra, 2014; Silvia Spallina and Salvatore Nastasi, 2015; Enrico Sterle and Nicoló Panzeri, 2016), in 2017 Luca Sironi and Andrea Bonaiti (left and right on the picture with their colleague, Peir Paoli Mainetti) joined co+labo, to get involved in some of our regular activities, take part in Keio Architecture Masters Studio and (as the key component of PoliMi ABC-co+labo collaboration) to advance their research and design-research for Graduation Theses back at home. Andrea and Luca have successfully completed a typically rigorous Politecnico process and received their masters Degrees. Warm co+labo congratulations to two of the best, international Keio boys!

Their AGRI+CULTURE was a project for an industrial area that influenced the urbanistic and economic growth of Casatenovo, a village in Brianza. The Master Thesis focused at development of an urban project for that area, with a special focus on the study of a new library for Casatenovo. The first part was developed at co+labo radović, starting from a comprehensive historic, economic, demographic and urban analysis which helped identify the requirements of local population. A functional program was organized and implemented in an urban masterplan, following an overall concept of agriculture, here based on the rich agricultural tradition of Casatenovo. The key building of that scheme is the library. The architectural project of the library was based on the analysis of local demands and then developed according to an integrated approach, taking into account the architectural, structural, lighting and energetic aspects. Luca, Andrea and their colleague, Pier Paoli Mainetti, Authors highlight the original shading system of the library, made of bricks, which is the main feature of the building, based on the local farmhouse shading system as an archetype. Every aspect of the project has been systematically developed with in-depth analysis and specific software simulations.
Their supervisor was  Professor Gabriele Masera, along with Prof. Marco Muscogiuri, Prof. Marco Pesenti, Prof. Darko Radović and Prof. Giulio Zani.

Posted by MIAW studio Radović at 7:46 AM 4 comments: