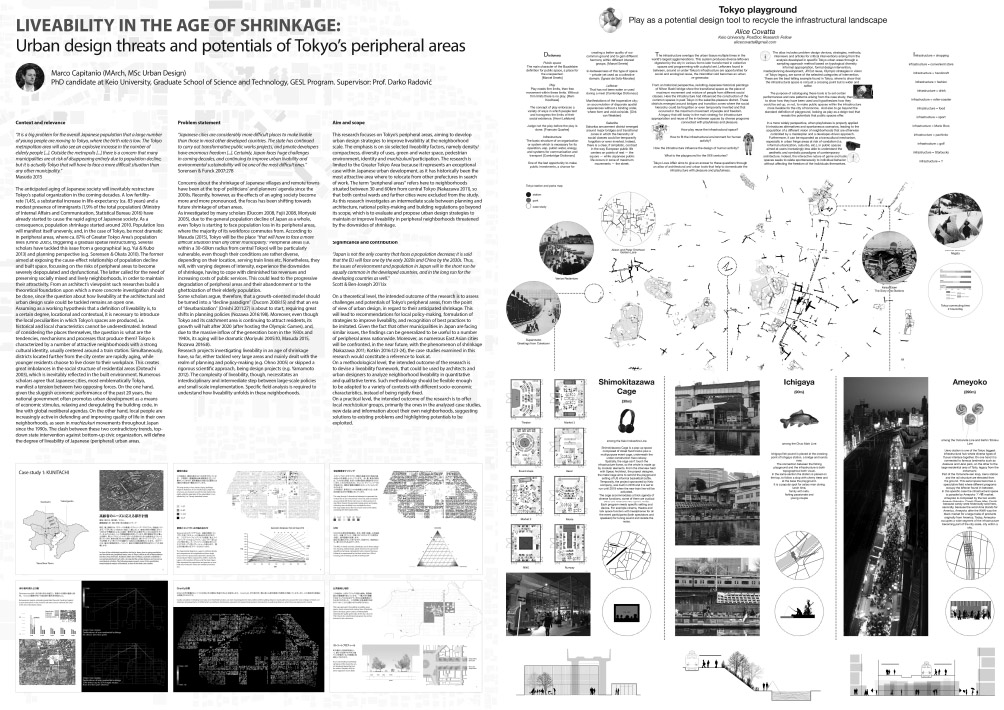 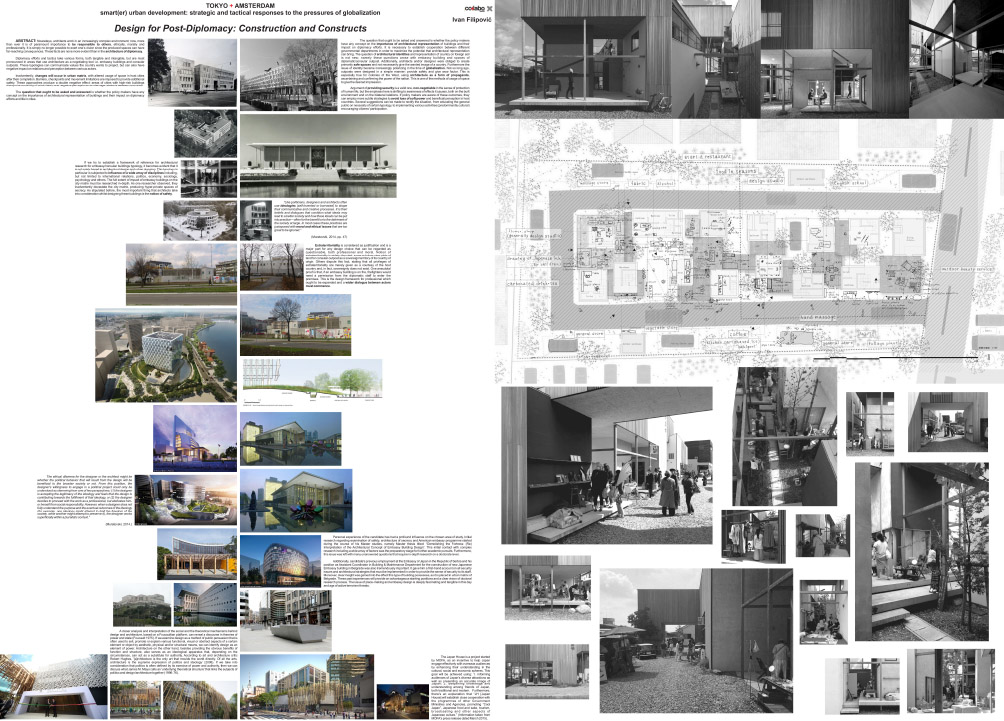 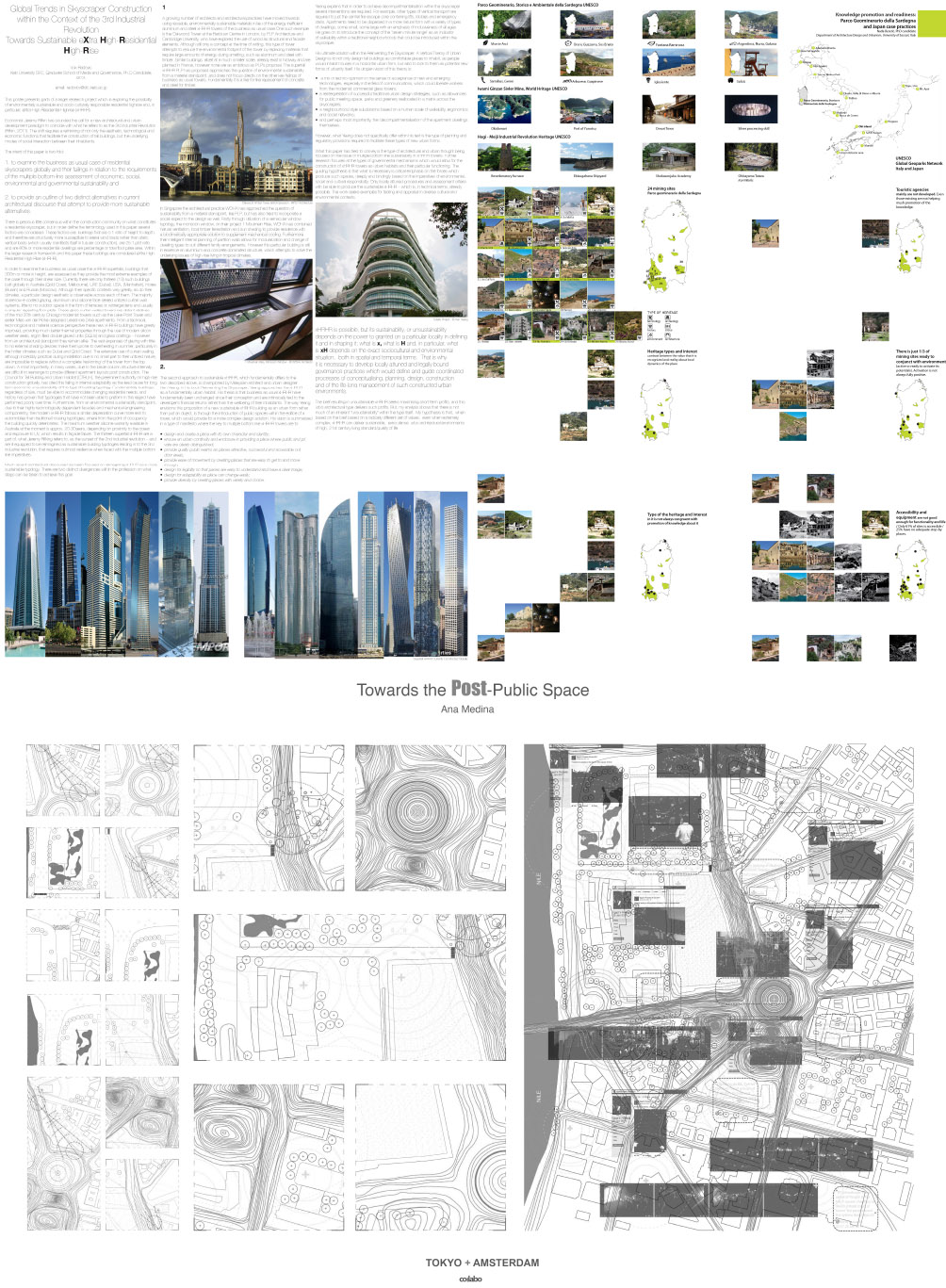 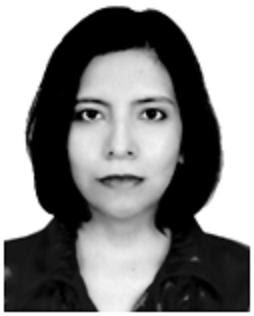 
Jessica has about 12 years of professional experience in urban planning, land-use planning, participatory planning and strategic planning at the urban level, mostly in Peruvian Southern cities. Her lecturing experience includes courses at the undergraduate and postgraduate level in urban planning, spatial policies and analyses and urban and architecture design in Peru and UK. She has presented her research findings in several academic conferences in Europe and in professional seminars in Peru. Her research interests include: the study of planning policy, practice and methodology in developing countries, the use and management of spatial data and spatial analyses in local decision-making and the impacts of infrastructure in the built-up environment and the urban functionality of cities.

Currently, Jessica is a JSPS Postdoctoral Research Fellow at Keio University and United Nations University (Tokyo), involved in research related to the socio-environmental dimension of public space and housing policies in developing countries and hosted by co+labo. 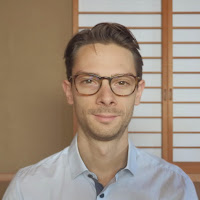 Marco studied architecture at the Mendrisio Academy of Architecture (CH) and urban design at TU Berlin and at Tongji University Shanghai, where he completed his Master’s studies in 2012. His professional experiences span from the architectural scale (construction drawings and detailed design in Switzerland and Japan) to the urban dimension (large developments and masterplans in China).
Marco is currently research assistant within the framework of GESL Program and Ph.D. candidate at Keio University; he is interested in combining research with professional practice and in transdisciplinary collaborations. His work focuses on liveability of the built environment, especially at the neighborhood scale, a topic that he has investigated in Europe and in China.

The anticipated aging of Japanese society and 0.00% growth rate in 2020-2025 (UN-Habitat 2013:161) will restructure Tokyo’s spatial organization in the coming decades. This process will be most dramatic in neighborhoods farther from central Tokyo, where ca. 87% of Greater Tokyo Area’s population lives. Several scholars have tackled this issue from a geographical and land-use planning perspective. From an architect’s viewpoint such researches build a theoretical foundation upon which a more specific investigation should be done, since the question about how liveability at the architectural and urban design scale can be investigated remains an open one. In fact, the complexity of the topic necessitates an interdisciplinary and intermediate step between large scale, prescriptive findings and small-scale implementation.
Assuming as a working hypothesis that a definition of liveability is, to a certain degree, locational and contextual, it is necessary to introduce the local peculiarities in which Tokyo’s spaces are produced. Tokyo is characterized by a number of attractive neighborhoods with a strong cultural identity, usually centered around a train station. Simultaneously, districts located further from the city center are rapidly aging, while younger residents choose to live closer to their workplace. This creates great imbalances in the social structure of residential and mixed-use areas, which is inevitably reflected in the built environment. In order to analyze selected case studies, identify their strengths and shortcomings from an urban design point of view, a definition of liveability and its constituting factors, tailored to its context, is fundamental. 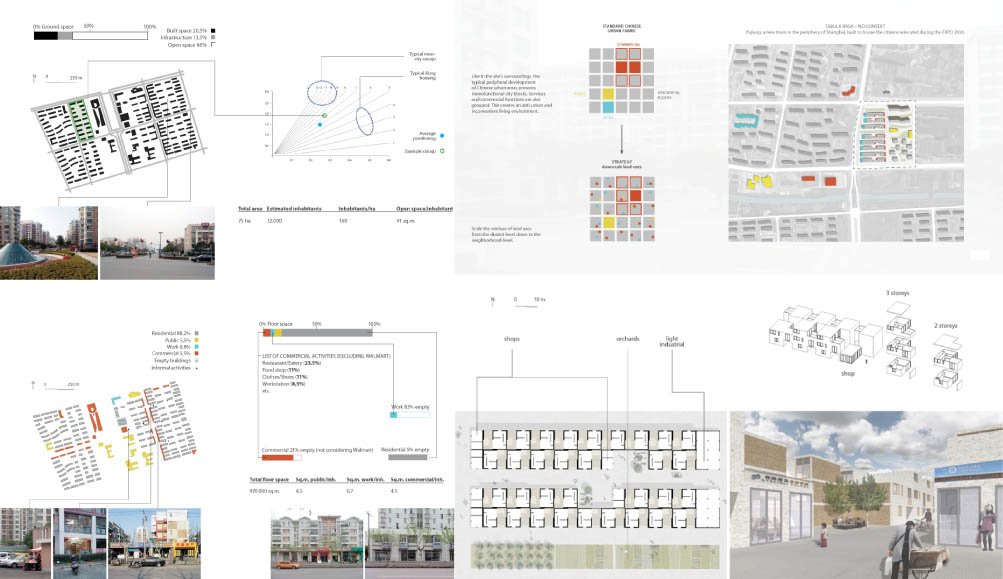 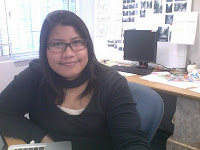 An architect and a lecturer at the Faculty of Architecture, Kasetsart University in Bangkok. She got her B.Arch in Architecture from KhonKaen University and M.Arch in Urban Design from Chulalongkorn University in Thailand. Now, she is a Ph.D. candidate of the Graduate School of Science and Technology, Keio University, Japan due to the Japanese government scholarship. Her research is about the phenomenology of radical changed cities specifically affected by the introduction of new transportation technologies in Tokyo and Bangkok. She is interested in the sense of place and community, urban morphology and urban transportation.

Research theme:
Many research projects focus at outstandingly successful Japanese railway systems. While most of those deal with various engineering, technical and environmental aspects, a comparatively small number focuses at their contribution to definition of urban character of the neighbouring areas. This thesis explores the impact of several, carefully chosen railway stations in Tokyo on the immediately adjoining, commercial and mixed-use areas.
The focus is on Tokyu-Toyoko line, which links Tokyo and Yokohama. On the basis of detailed typological study, Jiyugaoka, Musashi-Kosugi and Kikuna Stations were chosen as three representative cases for detailed investigations.
The methodology combines place and mobility theories with theories of urban quality and various livability concepts.
The emerging conclusions point at the ways ways in which well designed and managed railway stations create opportunities for emergence of urban character and specific nuances of quality. 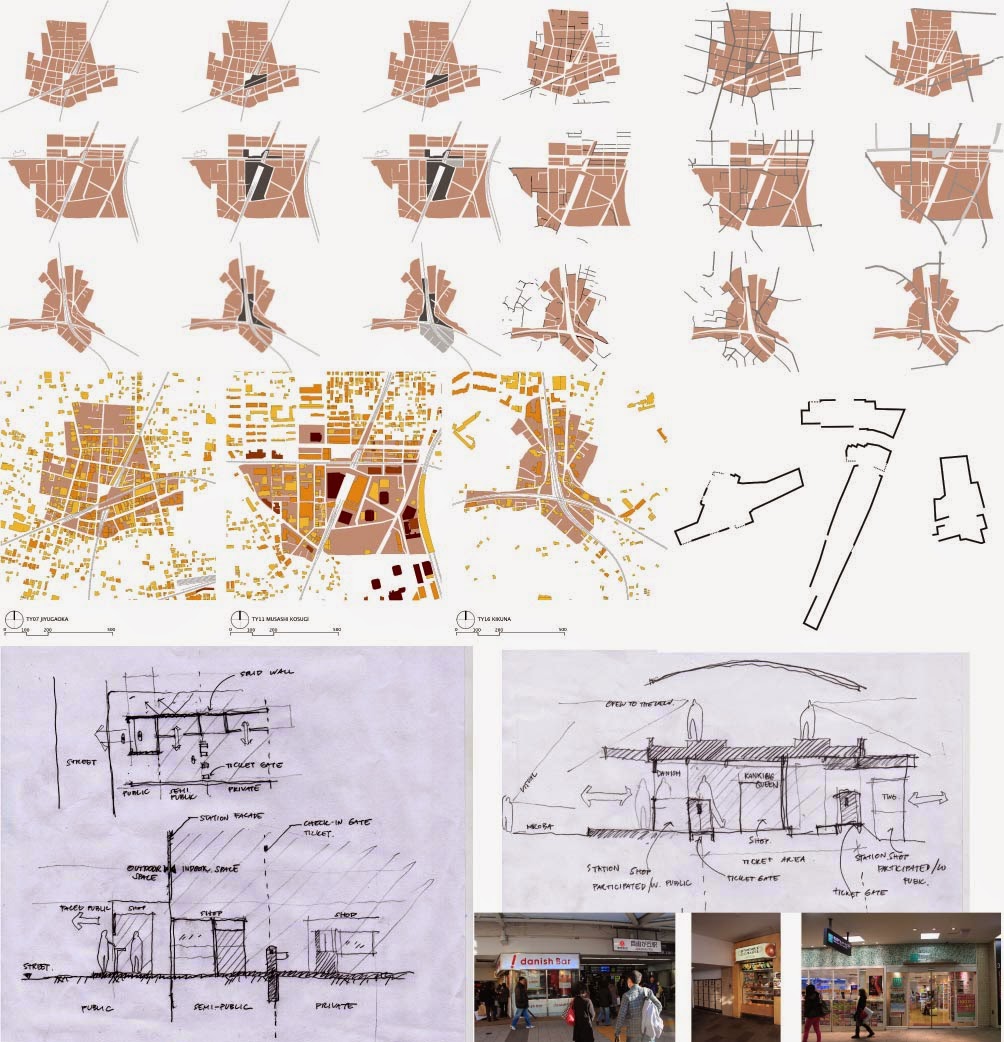 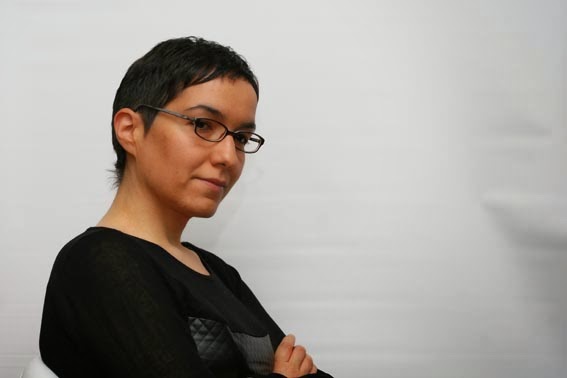 Research topic:
Reversible architecture in the past: Recovering strategies for a dissembled future


In the same way as it happens in nature, where everything is incorporated into a biological cycle, we must reuse and recycle everything we make and build as humans, and reintegrate these in the end back into the natural environment in a harmless and helpful way. In this sense, reversible and removable solutions are one of the best ways to address this proposal. In response to the current global environmental and economic challenges, instead of destroying the structures and systems to adapt them to new settings, the current building systems must be disassembled and their components reused, processed and reassembled in new combinations. This approach could finally allow existing buildings to serve as a source of raw material for new construction, replacing the resourcing of the natural environment.
If we consider “construction” as an assembly of pieces, joints will become one of the most important element involved in the shape and structure of the building. Dry and mechanical connections are the joints that can be disassembled, where intact in form and dimension pieces are connected, resulting in an assemblage of parts that is perceived as a whole and defining the building as a condition of being composed, with each part needed and nothing superfluous.  As opposed to this, chemical connections are those that can not be broken without altering the pieces that therein coincide, and resulting in a whole by continuity of the joined parts.
This research intends to start from the beginning. It is in ancient classical architecture, and also in  traditional architecture, where we find in a clear and obvious way precise balance in the relationship between elements, form and function, and the proper integration in each environment. Components and connections in these architectures allow us to understand the global assembly building, and let us to assess the potential of disassembly of each case. All construction systems applied in the present have their equivalent within the past. Following this statement, a careful reading of ancient and traditional architecture will allow to refine the design of the future. Obtaining the relationships between these from the past and from the future, and the integration of their advantages, will be the goal of this project.
A significant amount samples intended to take part of this work. Those related to the use of natural materials and developed in a respectful and sustainable environment will acquire a leading role. On these grounds, wooden structures of ancient and recent architecture of Japan will be the focal task of the following stage of research. 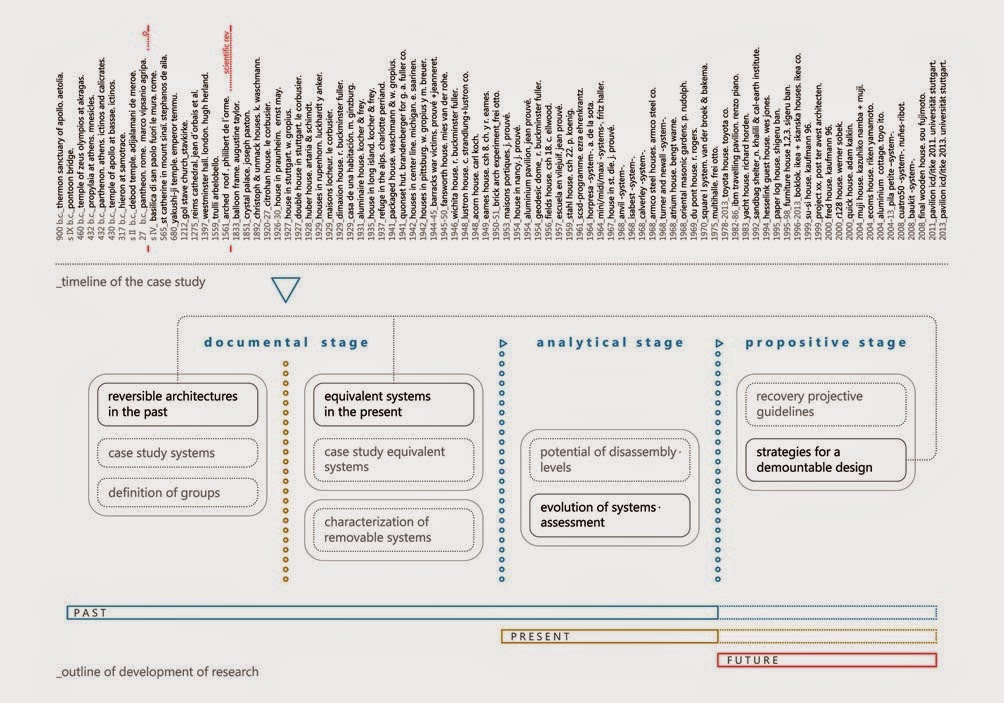 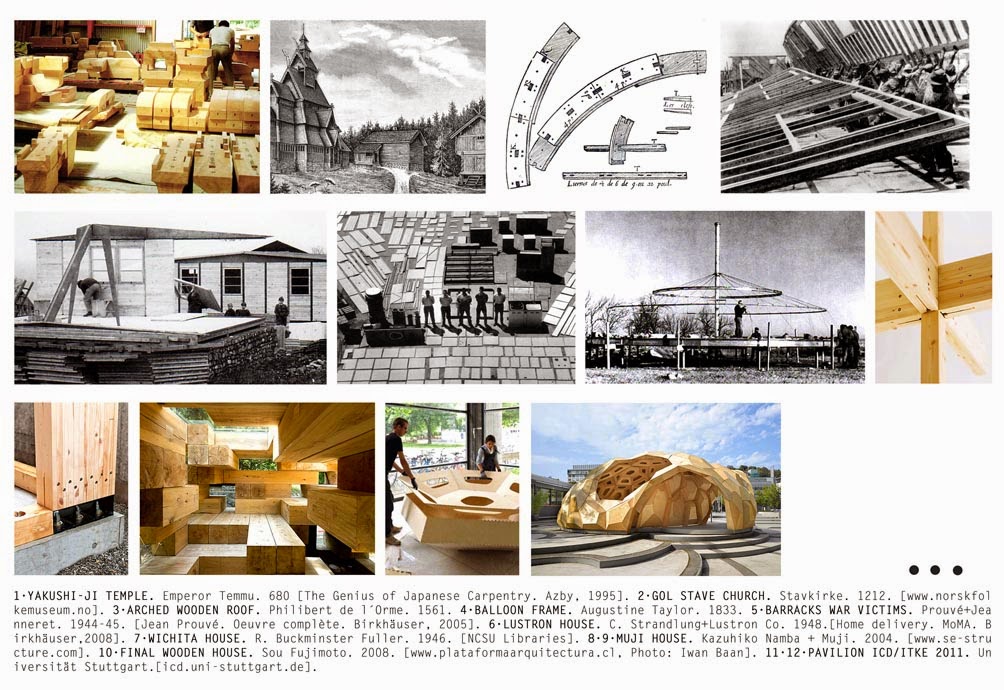 In December 2014, as part of her research at co+labo, Paula has conducted a fieldwork. Here is her brief report:

Related to my PhD project, I have conducted an amazing research trip, which included some of my key investigation sites in Japan: Shirakawa and Hida region, Ise Jingu, Shizuoka, and significant temples of Nara and Kyoto.

1. Over and under a thick blanket of snow, Shirakawa has shown its impressive traditional architecture. Over the last several decades, twenty six houses were disassembled and relocated to the village.

2. A great place of worship, but also a place of magnificent wooden architecture, Ise Jingu was recently dismantled, and in 2013 renewed and rebuilt in traditional, unpainted cypress wood.

3. The visit to, and an analysis of the selected temples in Nara and Kyoto have also provided useful information for the next stages of the research project.

And,
4.to complete the journey, I visited a wood factory in Takayama. I have seen shaping and modelling of wooden pieces which are used for manufacturing some of their key architectural products. Another set of data to be included in the research. 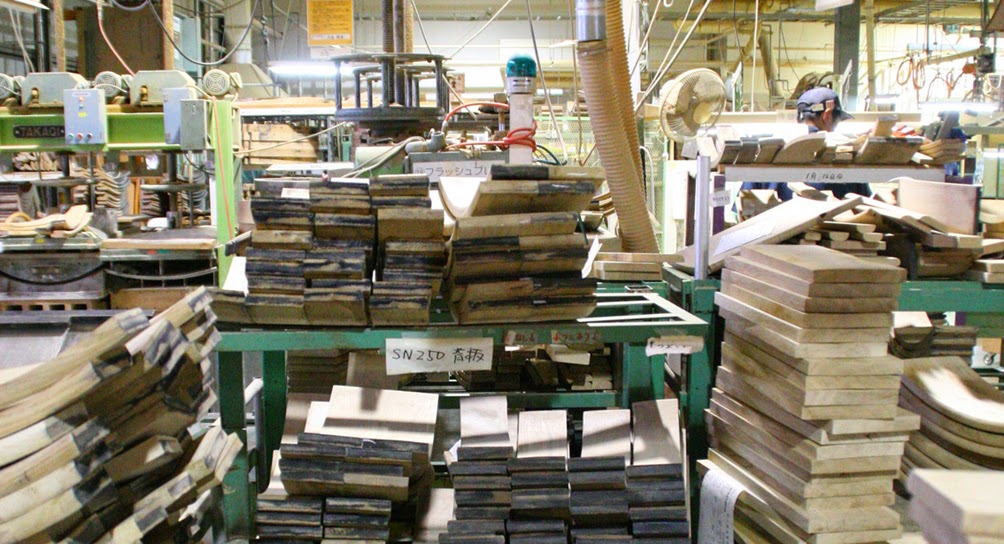 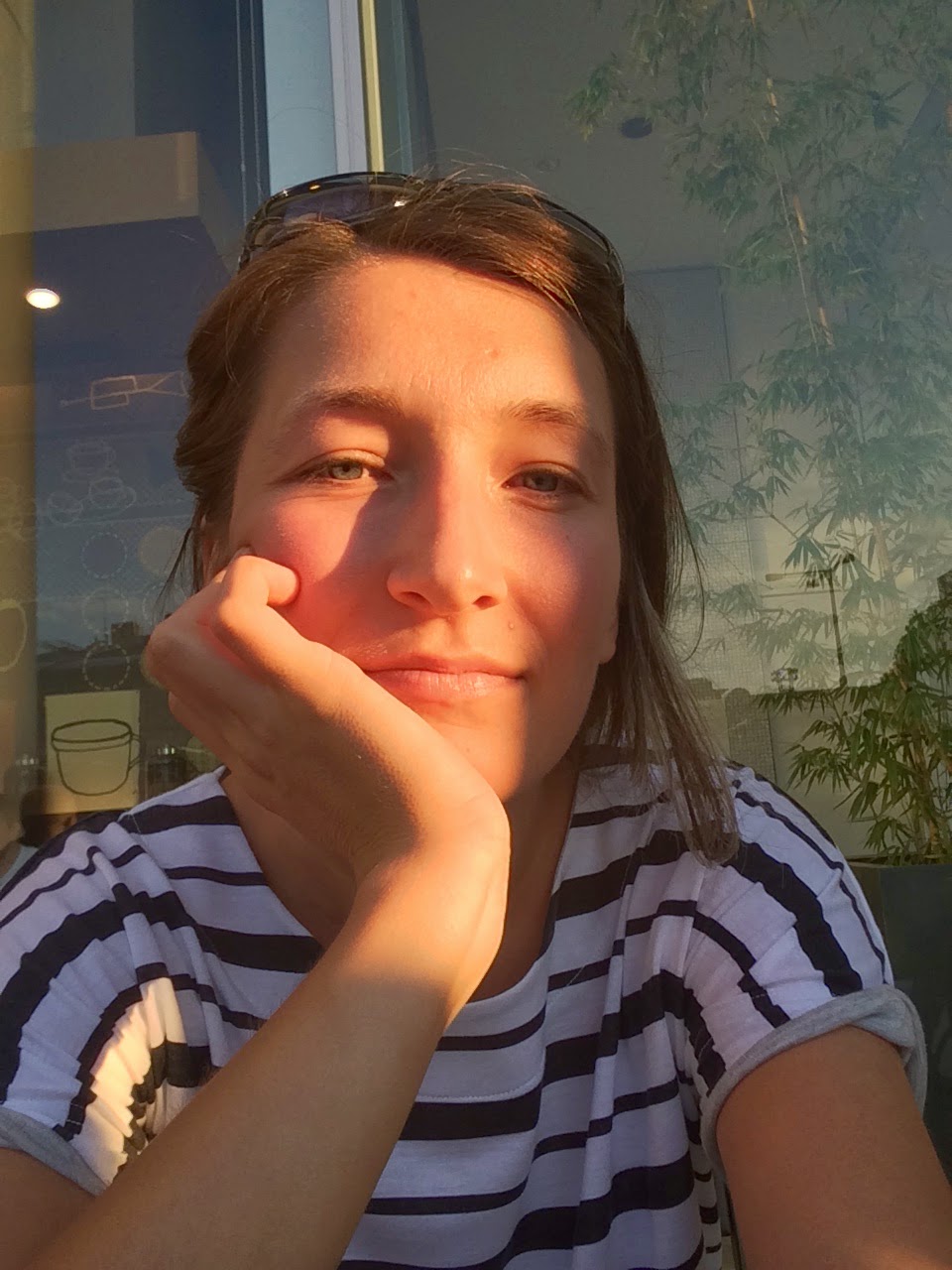 Trying to understand/ describe/define time gaps and space gaps, in encounter with self, with personal/individual/natural through lived that is not known;

through constant questioning of inside and outside world, self and other(s);

by walking and drifting, with and without purpose;

in physical and social city, created for many [but not for the one]. 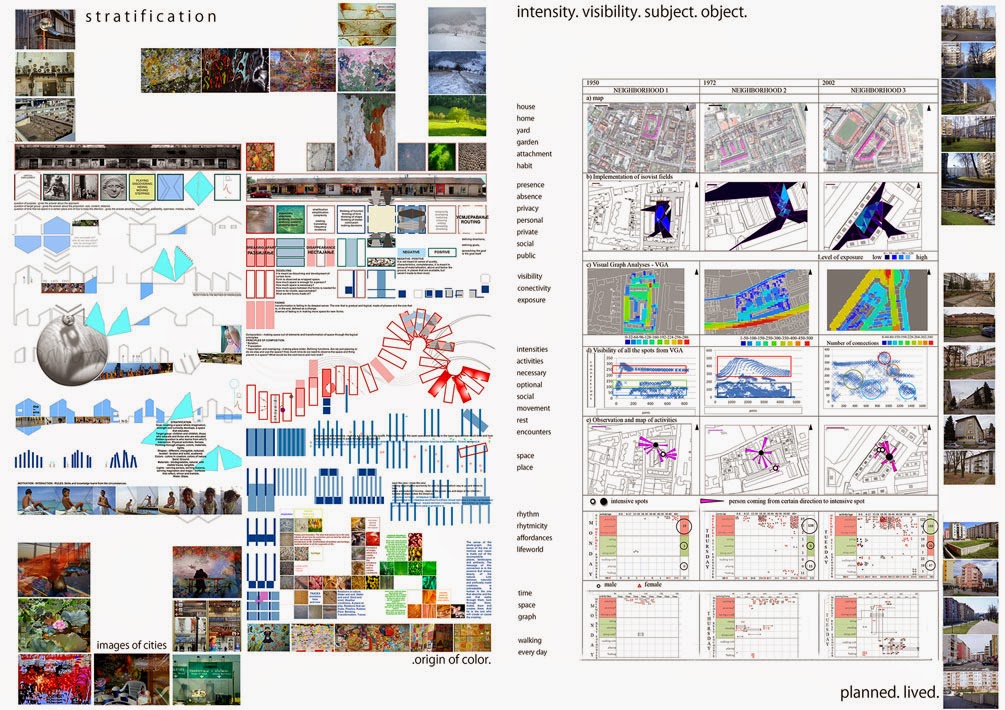 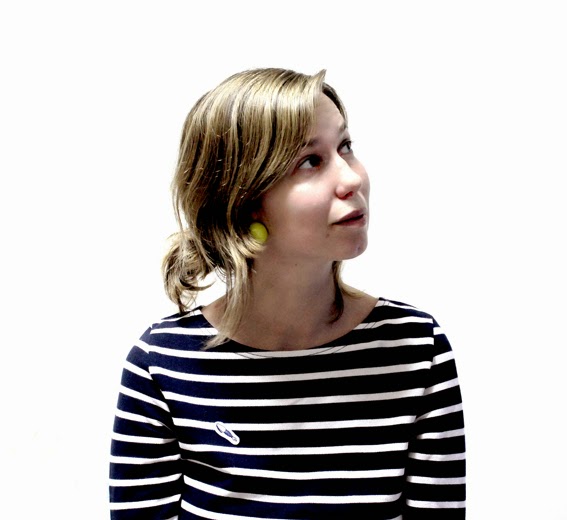 The research explores body extension into the media environment through haptic perception in order to abandoning optical supremacy for a non-visual theory. Providing corporeality as framework, human body exceeds its own border, it shirks and expands (Grosz), it incorporates prosthesis to augment some senses and to self-amputate others (McLuhan).
Taking as assumption that the Media City is getting distant to body perception and experience (Pallasmaa, Eisenmann, Debord) this event defines new demands to solve.
Steps:
1: explore haptic environment’s reincarnations and attributes into cyborg world.
2: investigate which interrelations occurs between separate elements through haptic experience.
3: understand why, even now, body needs physical intimate connection into public space.
The purpose is to review philosophical knowledge, architecture theory and as a final point pragmatic case studies to find alternative strategies to the dominant one, eye-distance-city. This framework overcomes visual fascisms without dictator created in this era.
Concerning Tokyo as paradigmatic city more experimental then architecture itself, diverse haptic strata emerge from the media tissue through which understand societal norms that operate invisibly in daily relationships as qualities attributes.
The new representation challenges the idea of balance and control that conventionally infer upon city declassifying the usual paradigm (bigness, surgical, hedonistic,…) and eventually
reconstructing how architecture finds itself in its current situation and speculate on its future.
The method used is a mixed strategies, both qualitative and quantitative. At first three main
philosophical knowledge are reviewed and one media theory.
Jaques Lacan’s Möbius strip evidences inflection of mind into body and vice versa. Maurice
Merleau-Ponty evidences body and skin as the precursor of experience likewise child’s month is the medium for exploring objects and measuring space. Gilles Deleuze evidences in desire theory the assemblage as productive process between body (or fragment of it) linked with heterogenic plans. Last Marshall McLuhan media theory evidences touch as interplay of senses. It gives sense of measurement of something near and corporeal moreover interrelate separate units in the some way of numbers.
These knowledges within architectural best practices and utopias create a kaleidoscope for topics of interest.
Finally through this lens concepts are testes to be followed by a qualitative method involving detail pragmatic explorations with few case studies.
The method uses text-image analysis, observation, in-depth interview, measurement. Touch is not skin but the interplay of the senses, and the “keep in touch” and “getting in touch” is a matter of fruitful meeting of senses, of sight translated into sound and sound into movement, and taste and smell. Baudelaire had the true intuition of number as a tactile hand or nervous system for interrelating separate units, when he said that “number is within the individual. Defining number as a measure, it contains the whole world-feeling of a soul passionately devoted to the ‘here’ and ‘now’. Measurement in this sense means the measurement of something near and corporeal. 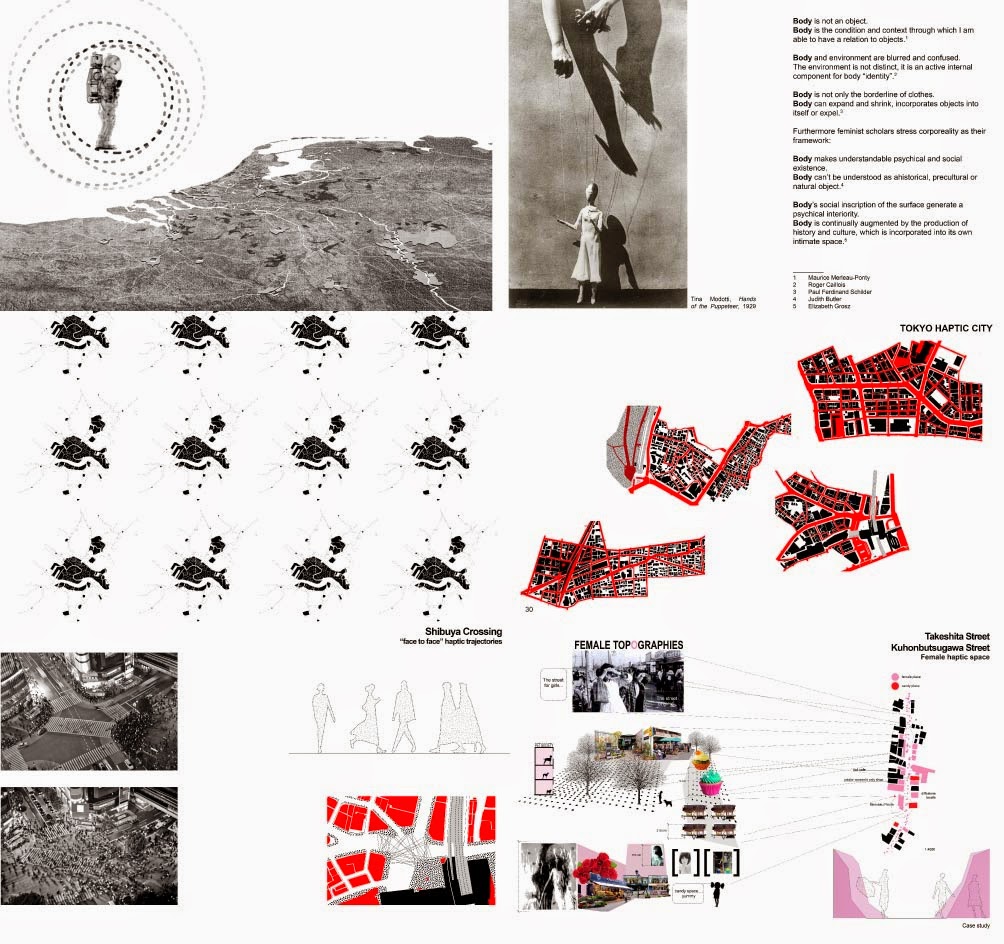 Milica Muminović (June, 1984) is an architect and PhD candidate of the Graduate School of Science and Technology, Keio University, Japan, with Mombukagakusho Scholarship. She has graduated at Faculty of Architecture, University of Belgrade, Serbia. For a year and half she has worked at Faculty of Architecture, University of Novi Pazar, Serbia, as teaching assistant. Her research is about identity, places, spaces in between architecture and urban scales, with emphasis on residential architecture in Tokyo. She has interest in places of becoming, places that offer more than what flatten reality of “now” displays.
Milica is now a Lecturer at the University of Canberra, Australia 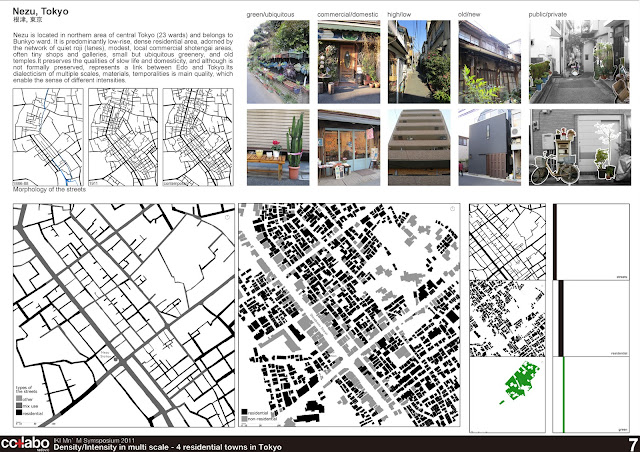 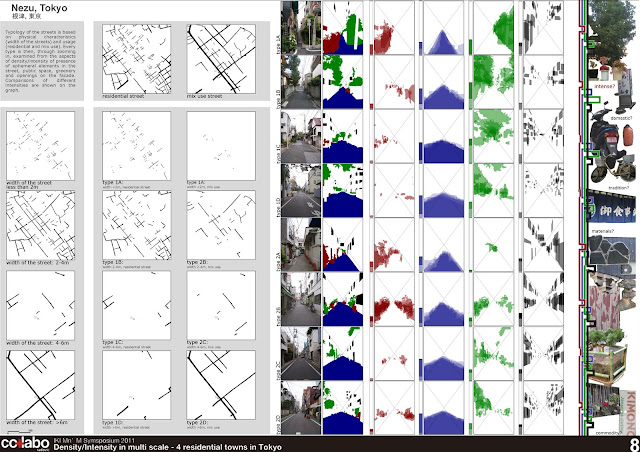