co+labo radović         Vedrana Ikalović's Final PhD review and  public defence
2019 at co+labo started with an important event at the very top, PhD end of our research production. Vedrana Ikalović has completed her Doctoral Thesis From Personal space to to Intimate Space: A Socio-Spatial Study of Domestic Urban Environments. Her final presentation and public defence in front of an interdisciplinary panel consisting of Professors Davisi Boontharm (Meiji University), Okabe Akiko (University of Tokyo), Jorge Almazán and Darko Radović/supervisor (both Keio University) was held on 15 January 2019.

A brief summary: In a metropolis, among the inevitable and constant presence of others, life is often described as solitary and alienated. Such paradoxes are among the main features of metropolises, which attract more and more individuals who dwell in complex urban conglomerations. How attached to these complexities can we become? To what extent is our attachment, and consequentially the lifestyles and habits, imposed by the characteristics and the affordances of the spaces we dwell? And is it possible to generate, through planning, urban spaces with spatial characteristics that afford interaction? This research investigated these questions through exploration of intimate spaces, which emerge from the relationship between the self and the city.
An integrated approach consisting of a sequence of methods from different fields of study explored the arising questions, in the context of contemporary Tokyo. The conceptual framework was defined and suitable methods customized for each segment of the project. Ethnographic and sociological methods were applied in the qualitative stage of investigation in order to define spatial and socio-cultural characteristics of the concept. Based on the outcomes of ethnographic study, two predominant meanings of intimate space in Tokyo downtown area were defined: the utilitarian and the decorative. The sociological study helped define another place (as the “fourth place”) - a place of rest and solitude where people do not necessarily interact with others - and the network of significant places which construe the dispersed home. In complex and widespread metropolitan areas, homelike activities are getting spatially dispersed across the city, out of the house, into a variety of leftover spaces which afford intimacy, privacy and comfort. 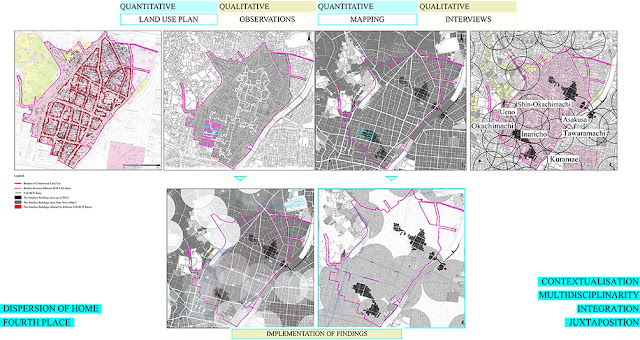 Intimate spaces, as meaningful spaces in metropolises and urban conglomerations, afford engagement with the environment through a broad range of activities. Their socio-spatial characteristics are used for the exploration of their possible integration into the existing planning documents. The key conceptual aspects of a sustainable city were compared to the existing multi-levelled Tokyo planning system. An integrated methodology that opens the potential for urban planning to make places imbued with meanings useful to practitioners and decision-makers was developed. As an example of its application, intimate spaces in Taito Ward were identified in the Geographic Information System (GIS) and inserted as an additional layer to the Land Use Plan. That was in recognition of both (1) an existing phenomenon which needs to be acknowledged and (2) the necessity for its strategic inclusion in spatial planning of a sustainable metropolis.
Posted by MIAW studio Radović at 8:51 AM 9 comments: