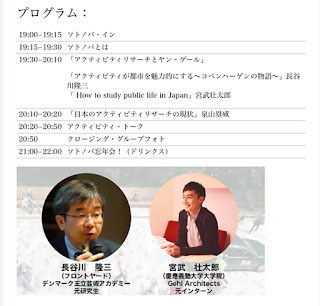 After his successful internship at Gehl's office in Copenhagen and involvement in regular co+labo urban research and design activities in Tokyo and abroad, Sotaro Miyatake, co+labo's final year Master student, was invited to speak at Sotonoba, a web-media event which specialises in discussions about the quality of public space. Sotonoba brings together urban planners, academics, writers, street performers and others interested in thinking and making better cities.
This invitation is a great recognition of Miyatake's and broader co+labo efforts to, using immense energies and potential of urban life of Tokyo and the momentum of the forthcoming Olympic Games, help advance the quality of public life and public space in this city.
The Sotonoba event will be held on Friday, 9 December, from 19.00, at Bird discussion space in Daikanyama.
Posted by MIAW studio Radović at 4:25 AM 2 comments: