In the period 2011-2014 co+labo radović and IKI - International Keio Institute for Architecture and Urbanism were the organiser and the epicentre of major, international, interdisciplinary research project Measuring the non-Measurable - Mn'M, which was supported by the Japanese Ministry of Education and Training Strategic Research Grant.
The focus of the project was on urban quality. It entered the field of debates about urban quality by challenging the very idea of measurability. An important aim of the project is to address the unsustainable schism between qualitative and quantitative, “textual” and “numerical” in the urban and to reach towards addressing the Lefebvrian oeuvre. In order to get there, at the broadest, conceptual level, Mn’M investigated the relationships between system theory (social sciences and engineering) and assemblage theory. Its cross-disciplinary theoretical frameworks relied on place theory, Lefebvrian social theories and the idea(l) of eco–urbanity. At methodological levels, the project combined standard research practices with emerging sensibilities and some resurgent critical practices, such as Situationism and psychogeography.
Mn'M has produced ten volumes, with contributions from a number of Mn'M core and adjunct team members, academic and practitioners from Australia, China, Croatia, Denmark, Germany, Hong Kong, Italy, Japan, Latvia, Mexico, Netherlands, Serbia, Singapore, Spain, United Kingdom and Thailand.
The books from this edition are now available directly form the publisher, Tokyo's flick Studio. 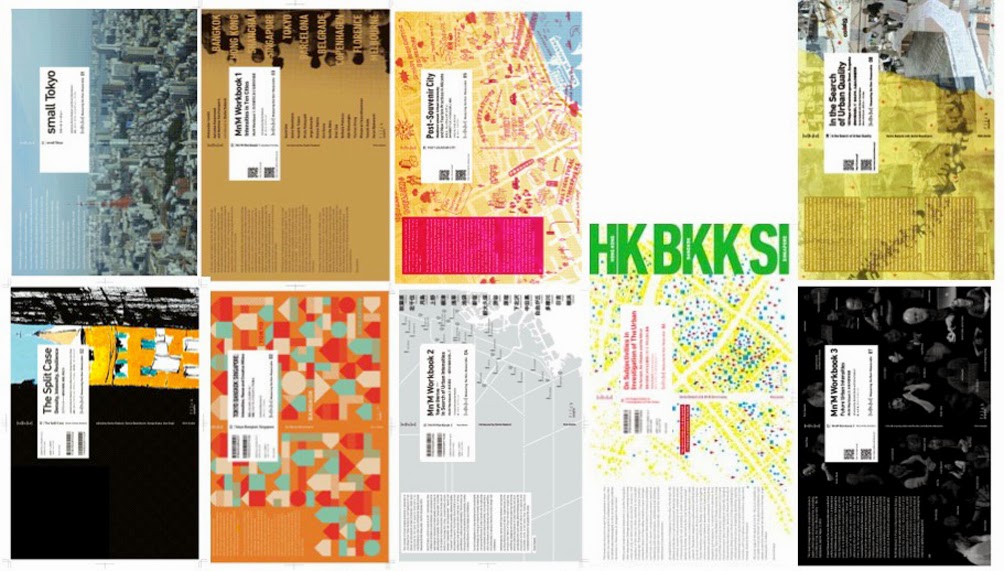 Darko Radović, Davisi Boontharm (2014)
In the Search of Urban Quality: 100 maps of Kuhonbutsugawa Street, Jiyugaoka, Mn’M edition Tokyo: flick Studio and IKI
This book presents the material compiled for one of the case studies conducted within Measuring the non-Measurable – Mn’M research project. It brings together a number of maps of one particular place in Tokyo – the precinct of Jiyugaoka and, more precisely, only one of its streets, Kuhonbutsugawa Ryokudo. The focus on a small location in the largest city in the world is a message in itself. When speaking about the actual quality (of life), we need to think about a particular city, decidedly local scales, concrete experiences of environments which we regularly see, hear, touch, smell and taste – the spaces and practices which we actively live.
The primary focus of Mn’M is the elusive notion of urban quality. We enter discussions by challenging the very idea of measurability. In this book the emphasis is not on how to measure, but how to recognise, record and communicate urban quality, especially those aspects which tend to be left out, either declared “unimportant”, “too subjective” or, simply, too hard to deal with. Urban theories presented or, rather, touched upon in this small volume, are theories of action, arising from practical experiences in thinking and doing urban design and urban research in co+labo Radović, Tokyo (an urban design and architecture laboratory at Keio University, which is the hub of Mn’M project, and its various associates), and co+labo international strategic partner, Gehl Architects, Copenhagen – with texts by Jan Gehl, Birgitte Svarre and David Sim.

Satoshi Honda (ed., 2014)
Future Urban Intensities, Mn’M edition Tokyo: flick Studio and IKI
This book brings together a selection of research papers, which were first presented at the concluding, third Measuring the non-Measurable – Mn’M Symposium, held in Tokyo 11.2013.
Mn’M Workbook 3: Future Urban Intensities brings a selection of essays which present both the optimism towards the ever-finer measurement and representation of finest qualities of the urban, as well as doubts, which are intended to provoke, stimulate and deepen further discussion. It summarises some of the emerging ways of thinking, making and living the urban in a rapidly changing world.

Darko Radović (2014)
Subjectivities in Investigation of the Urban: the Scream, the Shadow and the Mirror, Mn’M edition Tokyo: flick Studio and IKI

On subjectivities in investigation of the urban: The Scream, the Shadow and the Mirror puts forward a simple but contentions issue - the need for non-reductive approach to investigations of the urban. It is deliberately polemological. It aims, in the tradition of Michel de Certeau, to “force theory to recognise its own limits”. The book joins discussion about the necessity to address complex urban phenomena with complex methods. It theorizes need for new sensibility in urban research and design, by directly addressing the most contentious aspect - namely the inclusion of subjectivity and sensuality in urban research.
Theoretical exegesis is complemented and illustrated by three visual essays by Milica Muminović, Ilze Paklone, Tamao Hashimoto and Rafael Balboa, which bring together various records from fieldwork sessions which, inspired by the Situationists practice of dérive, were conducted in Hong Kong, Bangkok and Singapore, in collaboration between Keio University, Tokyo, Chinese University of Hong Kong, Chulalongkorn University and Silapakorn University, Bangkok, and National University of Singapore. The focus of these methodologically radical experiments was on recognizing, identifying, capturing, (re)presenting and sharing diverse spatial expressions of urban intensity, with an emphasis on the commonly suppressed feelings, intuition and sensuality.

Post-Souvenir City brings together essays and investigations by architects, urbanists and other specialists, in which they address various dimensions of tourism and urban space. The focus is on Spain, whose tourism is among the most visible in the world, and which has experienced both the excitements and the lows of tourism-fueled growth.
Recently, Spain was among the countries which suffered most in the global economic downturn. The environmentally and culturally unsustainable development has, first, spectacularised, then consumed and, eventually, all but abandoned the most attractive places of Spain. In order to change development patterns which glorify irresponsible growth, we need paradigm-breaking research and innovation. That can happen only within a broader, much needed paradigm shift that redefines the value system, so that it can recognise the difference between precious, rooted cultures and the superficiality of banal Disneyification. That is where Almazán places the work presented in this volume, and opens its themes to public.
Darko Radović (ed., 2013)
Tokyo dérive: In Search of Urban Intensities, Mn’M edition Tokyo: flick Studio and IKI
Tokyo dérive: in search of urban intensity brings together 23 visual essays, the results of a number of drifts through the streets of Tokyo. These essays capture both the objects and subjects of inquiry, by layering urban situations and diverse dioptries, approaches, preferences and sensibilities applied to their observation. The idea was to create “an occasion for asking more fundamental questions. What is the researcher searching for? And if it’s the other, who is the other?” (Auge, 1998). In our case, the object of inquiry was otherness of the urban.
These essays are presented as open texts(ures), notations which invite the reader to freely project her/ himself into recorded spaces, practices, subjectivities and precious little hints at knowledge captured in the net of inquiry. In that sense, the draftish, messy, sketchy character of the recordings was not only inevitable, but highly desirable. These traces of dérive sessions were meant to stay explorative and tentative, to provoke. Born, or at least conceived, in an instant, they mix and, thus, open various spatial forms and activities, the what and the how of research, to dialectisation. They are, again, about the ways of seeing, as much as about the objects of perception.

In this book, Davisi Boontharm explores and theorizes bottom-up processes of urban requalification in Tokyo, Bangkok and Singapore. Her work builds upon investigations conducted over the several years of living and working in those three cities. That provided the author with unique insights which combine academic and lived experiences, and thus perfectly correspond with an overall ethos of the Mn’M project.
The focus is at urban creativity of a modest kind, a creativity which expresses itself as an attitude to life, a drive, a particular quality. As such, it is non-institutional, abstract and decidedly non-measurable. The cases presented are places of consumption, marked by encounters of various intensities between public and private realms, spaces and interests. The fields of forces generated by such encounters facilitate emergence of a particular air of creativity, an atmosphere which spills out to mark broader quality of the adjoining public spaces, ordinary streets and everyday life in general.
With its special emphasis on reuse of ordinary building stock, this book advocates bottom-up initiatives and asks for reconsideration of latent qualities of ordinary architecture, which is often forgotten or described as banal.

Davisi Boontharm, Ana Grgić, Kengo Kuma, Darko Radović (eds. 2012)
The Split Case: density, intensity, resilience, Mn’M edition Tokyo: flick Studio and IKI
The Split Case, edited by Darko Radović (Keio University), Davisi Boontharm (National University of Singapore), Kengo Kuma (University of Tokyo) and Ana Grgić (University of Split) is about one particular city, about cities in general, and about the ways to approach the urban. The aim is to present the city as authentic urban practice, hypothesizing how unique practice demands authentic method, one that is capable to simultaneously address times and spaces, the glamour and the everydayness of the urban. The city we are focusing on is Split, urban centre of Dalmatia. Undeniably unique, the centre of Split offers an amazing potential for generalization. That treasure house of Mediterranean and broader Western urbanities has the capacity to interrogate urban and cultural theories.

This book brings research and visual essays by local and visiting experts and cross-cultural, interdisciplinary teams of students from Croatia and Japan.

Darko Radović, Davisi Boontharm (eds. 2011)
small Tokyo, Mn’M edition Tokyo: flick Studio and IKI
Smallness begins not in Tokyo but in the mountains. There in the mountains almost anywhere in Japan, the crumpled folded spaces of steep mountain valleys and the circuitous meanderings of valleys seem designed to confuse the traveller. All sense of distance is confounded; that which is near seems far, the large seems small.
Tokyo, sitting at the centre of by far the largest conurbation in the world, replicates this mountain landscape. It is replete with small things, small gaps between buildings, small thoroughfares in narrow townscapes, small distances between different districts. Despite its vast size Tokyo appears strikingly small. This is why we should extend a warm welcome to this exploration of small Tokyo that Darko Radović, Davisi Boontharm and their colleagues have put together. ... it is an explication, helping us to understand how these small spaces are created, animated and enjoyed. (Paul Waley) 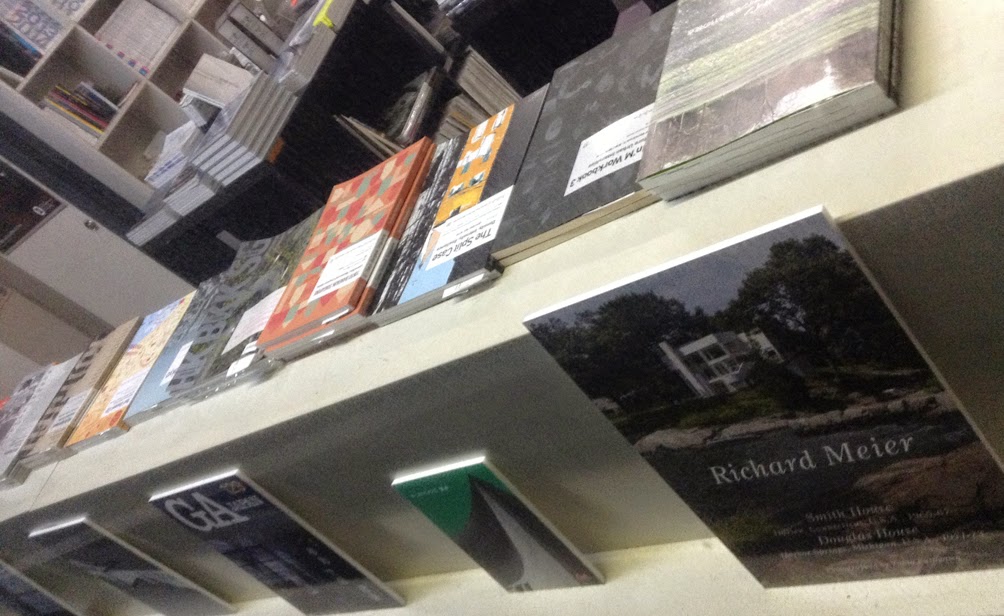 Measuring the non-Measurable edition in one of the fine bookshop-windows of Tokyo.