co+laboradović The Klis Case, days 5+6+7+8: new ways in collaborative workshopping
The design of this entry in colaboradovic.blogspace.com was affected by changes
introduced by blogger.com. The enforced changes forced the departure from our
formatting which was established eleven years ago. We hope to be able to return,
to our standard image soon. In the meantime - our apologies to regular viewers.
The Klis Case co+re workshop, one in which the sun never sets, continued with design crit sessions conducted in six parallel rooms, self-managed by six complex, international, interdisciplinary teams, and rich plenary interim presentation. 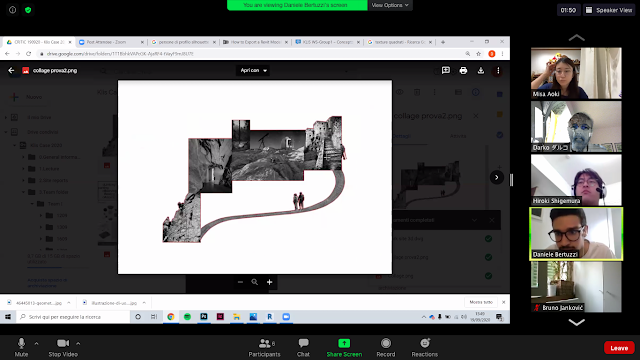 Besides the quality of design work, The Klis Case projects which are in advanced stages of making, the process, the way in which this experimental workshop was conceptualised and in which it is being conducted was nothing short of exciting. Over the years, our workshops have always provided the intensity and quality of both work and its products; the initial fears about the effects of the imposed and sudden move online are proving to be largely unfounded. The impression is that the workshop produces an increase quantity of work and of its quality. That is still only perceived, and will be analysed by a separate co+re  research project (which unfolds in the background of The Klis Case. Tomorrow, on Sunday 20 September, the final review in front of the Mayor of Klis Mr Jakov Vetma and his team will add another important dimension, a touch of local passion and realism.