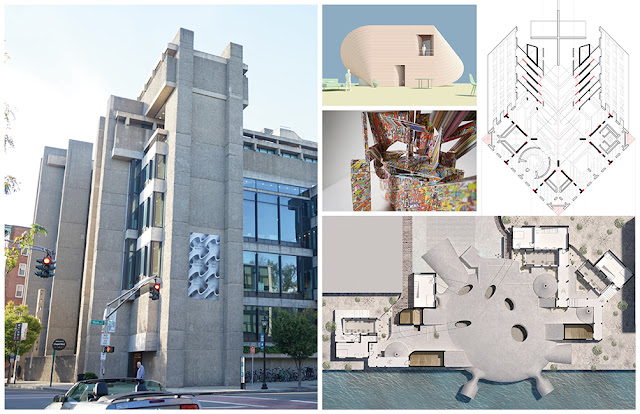 Following his presentation so co+labo and TAUD 2O2O students at Keio, our Samejima-san continues the development of his theme with a talk at the University of Tokyo - by zooming into the themes opened and zooming out, to explore the widest horizons of his interests. He explains that, very much in tune with Darko's own gaijin fascinations and frustrations discussed and problematised within TAUD since its inauguration on 2009, he is going to argue how "the impossibility of the translation between 'Architecture' and kenchiku precisely lies in the matter of 'Form'. If kenchiku made its prior concerns on the problem of 間 (ma = space, atmosphere), or the interface between Interior and Exterior, or its harmony with the surrounding environment, 'Architecture' on the other hand, has been dealing with the matter of 'How to create buildings as a Form-Object?'." Samejima-san claims how "it is not an overstatement to say that History of 'Architecture', is precisely the History of Form. This can be seen in the continuous discourse on Form, from Brunelleschi, Alberti, Bramante to Palladio, Borromini, and even to Corbusier, Louis Kahn, Aldo Rossi and O. M. Ungers. Such discourse on Form can still be seen in the contemporary dialogue among architects in the US, continuous from Renaissance for more than 500 years." He promises that in his Todai lecture "I will talk about this 'Matter of Form', through my Graduation thesis done in co+labo, education at Yale, fFormal Analysis with Peter Eisenman, Studio curriculums, and by introducing some of the contemporary discourses in the US. Such topics will include 'Image-culture', 'Theories on color', 'Pop-Post-Modernism', 'Primitive Forms' and 'Object-Oriented Ontology'. The discussion will elaborate this topic on Form in relation with contemporary issues such as 'Black Lives Matter' movement, the recent presidential election in US, and the age of Anthropocene and so on." For co+labo, this is a moment to cherish, a moment when one of our own takes off high, into the fascinating confluences of diverse architectural histories, theories and practice(s). Samejima-san's departure to Yale helped him enter the fertile fields of thinking about built environments which, to a careful observer and learner as he is, expose the limitations of both strong, but still regional Japanese ways, and of domineering, but still weak and insufficient "American" ways. The world of architecture is always richer and - what to say about the worlds of urbanism. At co+labo and at co+re we hope and we promise to wholeheartedly support discussions of the kind which Samejima-san brings back to his laboratory, and to his own intellectual world in the making.
Posted by MIAW studio Radović at 6:29 AM